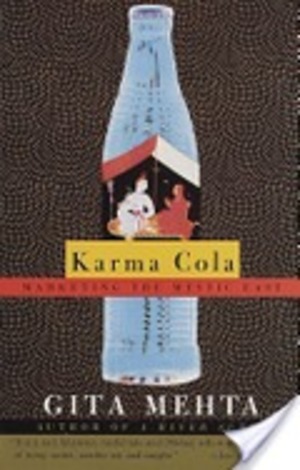 Gita Mehta
Beginning in the late '60s, hundreds of thousands of Westerners descended upon India, disciples of a cultural revolution that proclaimed that the magic and mystery missing from their lives was to be found in the East. An Indian writer who has also lived in England and the United States, Gita Mehta was ideally placed to observe the spectacle of European and American "pilgrims" interacting with their hosts. When she finally recorded her razor sharp observations in Karma Cola, the book became an instant classic for describing, in merciless detail, what happens when the traditions of an ancient and longlived society are turned into commodities and sold to those who don't understand them. In the dazzling prose that has become her trademark, Mehta skewers the entire Spectrum of seekers: The Beatles, homeless students, Hollywood rich kids in detox, British guilt-trippers, and more. In doing so, she also reveals the devastating byproducts that the Westerners brought to the villages of rural lndia -- high anxiety and drug addiction among them. Brilliantly irreverent, Karma Cola displays Gita Mehta's gift for weaving old and new, common and bizarre, history and current events into a seamless and colorful narrative that is at once witty, shocking, and poignant. From the Trade Paperback edition.