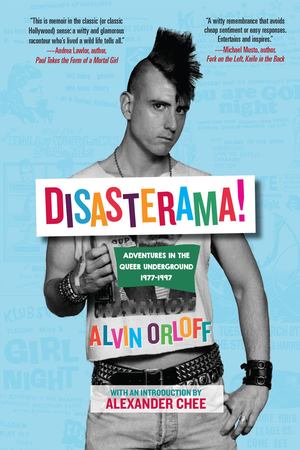 Alvin Orloff, Alexander Chee (Introduction by)
DISASTERAMA: Adventures in the Queer Underground 1977 to 1997, is the true story of Alvin Orloff who, as a shy kid from the suburbs of San Francisco, stumbled into the wild, eclectic crowd of Crazy Club Kids, Punk Rock Nutters, Goofy Goofballs, Fashion Victims, Disco Dollies, Happy Hustlers, and Dizzy Twinks of post-Stonewall American queer culture of the late 1970s, only to see the "subterranean lavender twilit shadow world of the gay ghetto" ravished by AIDS in the 1980s. Includes an introduction by Alexander Chee (How to Write an Autobiographical Novel (2018, HMH Books). In Disasterama, Orloff recalls the delirious adventures of his youth--from San Francisco to Los Angeles to New York--where insane nights, deep friendships with the creatives of the underground, and thrilling bi-coastal living led to a free-spirited life of art, manic performance, high camp antics, and exotic sexual encounters, until AIDS threatened to destroy everything he lived for. In his introduction, award-winning essayist and novelist Alexander Chee notes, "There's a strange love I have for these times that can be hard to explain. How can I love what I lived through from a time that was as 'bad' as that? But as I read this, and those days came into view again, what I think of that love now is that there was a beauty to the beauty you found then that was made the more fierce by the horror of what was happening. If you could still find the worth of your life, still find sex, love, friendship, your own self-worth amid these attempts by the state at erasure and the ravages of the AIDS epidemic, then it had the strength of something forged in fire." Orloff looks past the politics of AIDS to the people on the ground, friends of his who did not survive AIDS' wrath--the boys in black leather jackets and cackling queens in tacky frocks--remembering them not as victims, but as people who loved life, loved fun, and who were a part of the insane jigsaw of Orloff's friends. Disasterama showcases Orloff's wit and poignancy as he relays the true tale of how a bunch of pathologically flippant kids floundered through a deadly disaster, and, struggled to keep the spirit of camp and radicalism alive, even as their friends lost their lives to the plague.

@ralowe
Reviewed: 2020-05-21
when i think of people living through aids in the 1990s (and by "people" in this context i'm probably always referring to gay white men, although one cannot mean exclusively gay white men as the sum of who lived through that time) i imagine a heroically politicized consciousness standing stern against the winds of history. that's a queer projection of what i want; a thought that resistance will survive covid-19. it should hopefully follow by that opening sentence the lengths to how i've had to reassess and reconfigure my naive initial guess. through the cluttered thrift store hoard of sundry go-go tchotchkes in alvin orloff's *disasterama* i trained in on a ravenous decades-spanning irreverence. it's present in an earlier moment where orloff imparts she didn't join the white night riots because it was allegedly enacted predominately by femmephobic clones. fair enough. i assumed this indecorous sentiment written from within the safety of the cocktail and the eurocentric epidemiological temporal consciousness of an "after," although there really is no after to hiv/aids, not by far, not for everyone on planet earth. is this merely a memoir of her and diet organizing the popstitute phenomenon during the "aids years"? an alibi? a coping mechanism? it's hard to tell if *disasterama* is an entirely self-aware article of evidence against repressed mourning. i couldn't figure out how intentional these things were. just barely. whether it is the author, that is orloff, is attempting to honestly bare their authentic feeling from that time they suffered through and survived as it was then felt seems appropriate to assume, however much the sheer logistic challenge would impose itself. this might be what's trans queer in thinking about or against time. on page 171, orloff imparts secondhand of a parody protest (a protest of protest?) performed by the gender-blending performers at klubstitute's 1751 fulton location, boasting of how it was written about in *female masculinities* (going so far as to cite publication details), but while using its author's then-name, judith. the time distortion of grief? jack still accepts judith. but everyone i know uses jack, and it seems like jack uses jack more and more, but now. i bring this whole thing up as ostensible evidence of irreverence; i'm unsure. maybe i think it's evidence orloff appears outside the "jack"-usage continuum. maybe it's only evidence of confusion. temporal anomaly. (jesus, could you imagine trying to ask confirmed troll jack about current pronoun usage? the person who wrote *gaga feminism*? and about how queer pixar movies are?) orloff's best moments? take chapter 28: orloff approaches empathy through depersonalization. what is meant by this? do i mean a life without hegel? do i mean that power should automatically redistribute itself without a demand for recognition? yes! yes, for all that's so demeaning in respect being conditioned upon identification. i wonder if underneath it all this is what orloff wants: an unconditional belonging. failing that, we get irreverence, misrecognition. i wonder what mattilda bernstein sycamore, whose work depends on authentic personal material detail to communicate intimacy, would think of this? but i don't think orloff is presenting queer anti-relationality to be trendy five years ago (yes, i'm deliberately snubbing its revival in the recent work of calvin warren (but not in the name of anti-relationality, maybe"_)). could orloff tell mattilda why faggots are so afraid of faggots? relationality is an unavoidable thing to ponder in a covid plague that intensifies divisions, exclusions and stratifications. that orloff gives us her apathy on the page during the time of the aids crisis as she experienced it might be period-accurate, but oh, am i doing the thing where i treat two distinct points of lived affective intensity as fungible? the metaphors of secular humanism are so fucking hard to resist. i was recently re-reading *scenes of subjection* where saidiya hartman opens the book looking at the problem metaphor causes for empathy. hartman looks at the inter-sibling epistles of southern abolitionist minister john rankin and the secular humanist problem of ethical action based on identification. rankin resorts to imagining his white self and family on the coffle as a means to force his brother's epistemic break away from holding slaves, recently purchased. nice try! yes, i know of orloff's previous other more-colorful-seeming three novels from wikipedia but the real potential is in him pursuing this nouveau roman thing in chapter 28. how could i forget fredric jameson's disapproval of the nouveau roman: e.g. alain robbe-grillet goes on for *jealousy*'s scant total page count describing the measurements and spatial organization of a plantation without any written depictions of human affect or narrative action. the poetic (and enumerated!) diagnostic orloff offers in the fleeting chapter calls to mind the supplementary self-help sub-sections that accompany a whole recent generation of publications centered around certain needs of freshly formed subjectivities within vulnerable communities (especially books trying to help white people out of their racism). The Joey Graceffa memoir *in real life*'s second chapter concludes helpfully proffering a nice (non-diegetic?) list of ten reasons to be friends with one's sibling. again this never relents until SPOILER (are spoilers valid in memoir?) orloff's best friend diet/michael comes close to their deathbed in london; their host walter dies after they leave london. here, almost 200 pages in, orloff offers relief from the resolute misanthropy with an absolutely gorgeously written 8 sentences between pages 198-199. okay, i won't gush. *disasterama* is an engaged discourse on the power of sentiment and its conditions.
Item Posts
No posts
© 2021 libib.com / All rights reserved