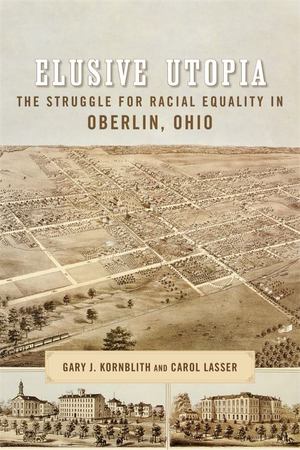 Gary Kornblith, Carol Lasser
Before the Civil War, Oberlin, Ohio, stood in the vanguard of the abolition and black freedom movements. The community, including co-founded Oberlin College, strove to end slavery and establish full equality for all. Yet, in the half-century after the Union victory, Oberlin?s resolute stand for racial justice eroded as race-based discrimination pressed down on its African American citizens. In Elusive Utopia, noted historians Gary J. Kornblith and Carol Lasser tell the story of how, in the nineteenth and early twentieth centuries, Oberlin residents, black and white, understood and acted upon their changing perceptions of race, ultimately resulting in the imposition of a color line. Founded as a utopian experiment in 1833, Oberlin embraced radical racial egalitarianism in its formative years. By the eve of the Civil War, when 20 percent of its local population was black, the community modeled progressive racial relations that, while imperfect, shone as strikingly more advanced than in either the American South or North. Emancipation and the passage of the Civil War amendments seemed to confirm Oberlin's egalitarian values. Yet, contrary to the expectations of its idealistic founders, Oberlin?s residents of color fell increasingly behind their white peers economically in the years after the war. Moreover, leaders of the white-dominated temperance movement conflated class, color, and respectability, resulting in stigmatization of black residents. Over time, many white Oberlinians came to view black poverty as the result of personal failings, practiced residential segregation, endorsed racially differentiated education in public schools, and excluded people of color from local government. By 1920, Oberlin?s racial utopian vision had dissipated, leaving the community to join the racist mainstream of American society. Drawing from newspapers, pamphlets, organizational records, memoirs, census materials and tax lists, Elusive Utopia traces the rise and fall of Oberlin's idealistic vision and commitment to racial equality in a pivotal era in American history.