Season to Remember, A 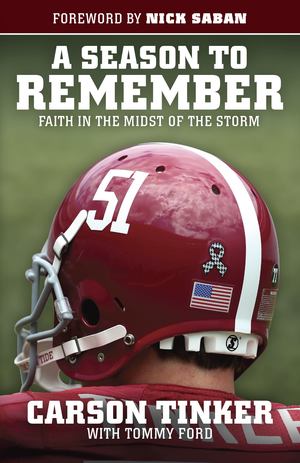 Carson Tinker, Tommy Ford, Nick Saban (Foreword by)
In Tuscaloosa, Alabama the world revolves around one thing: The University of Alabama's Crimson Tide. But on April 27, 2011 everything changed. An EF4 tornado ripped through the small college town and changed it forever. Carson Tinker, the starting long snapper for the 2011 and 2012 National Champion Crimson Tide, was among those forever changed by the events of April 27. Tinker lost his girlfriend Ashley Harrison to the storm, but not his faith. In the midst of unfathomable destruction, Tinker saw love, companionship, perseverance, and triumph in a community torn apart by a natural disaster. Where everyone else saw tragedy, Carson Tinker saw blessing. Following the storm, the Crimson Tide suited up to face their most challenging season to date. Tinker's personal story guides readers through what cannot be described any other way than a season to remember.