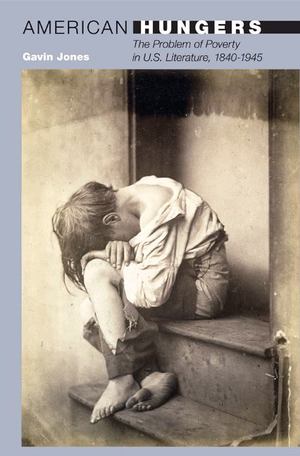 Gavin Jones
Social anxiety about poverty surfaces with startling frequency in American literature. Yet, as Gavin Jones argues, poverty has been denied its due as a critical and ideological framework in its own right, despite recent interest in representations of the lower classes and the marginalized. These insights lay the groundwork for American Hungers, in which Jones uncovers a complex and controversial discourse on the poor that stretches from the antebellum era through the Depression. Reading writers such as Herman Melville, Theodore Dreiser, Edith Wharton, James Agee, and Richard Wright in their historical contexts, Jones explores why they succeeded where literary critics have fallen short. These authors acknowledged a poverty that was as aesthetically and culturally significant as it was socially and materially real. They confronted the ideological dilemmas of approaching poverty while giving language to the marginalized poor--the beggars, tramps, sharecroppers, and factory workers who form a persistent segment of American society. Far from peripheral, poverty emerges at the center of national debates about social justice, citizenship, and minority identity. And literature becomes a crucial tool to understand an economic and cultural condition that is at once urgent and elusive because it cuts across the categories of race, gender, and class by which we conventionally understand social difference. Combining social theory with literary analysis, American Hungers masterfully brings poverty into the mainstream critical idiom.