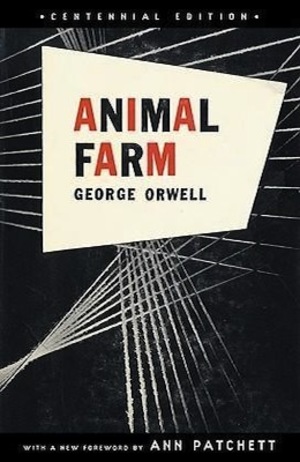 George Orwell
As ferociously fresh as it was more than a half century ago, this remarkable allegory of a downtrodden society of overworked, mistreated animals, and their quest to create a paradise of progress, justice, and equality is one of the most scathing satires ever published. As we witness the rise and bloody fall of the revolutionary animals, we begin to recognize the seeds of totalitarianism in the most idealistic organization; and in our most charismatic leaders, the souls of our cruelest oppressors.

It's been 45 years since I read this in school.  I'd forgotten that it was a critique of the Russian socialists, but boy, it sure is.  I enjoyed it again and had to shake my head at how much Orwell had the "human condition" pegged.  A true classic that ages well and is well worth reading!

the book reflected at the operation system of the governments at the time, it presents the very sad truth of how the nations suffered under faked dreams pushed to them by their governments and how by time they were forced to live these dreams, and then take them away from them and cruh them with their souls. i wished for a much happier and lighter ending, but life isn't always fair, is it now?

@fourfreedoms
Reviewed: 2019-05-17
I cannot rate this book, right now, because I recall reading it many years ago and not being especially impressed by the book, partly because it hit too close to home and to my current situation. Perhaps, as with other books, now that I am no longer worrying about dividing long enough to get out of high school and whether or not I will be able to find enough scholarships to get to college, I can read this book in the spirit in which it was intended.
@scaredofspiders
Reviewed: 2018-12-26
I don't even know what to say, really.* The fact that the book is an allegory makes it both fascinating and difficult to digest. When viewing the animals that are not pigs as average people, their willingness to maintain the status quo, allow the past to be rewritten in front of them, and to generally just suffer because they are told it is for their own good is simultaneously utterly believable and unbelievably sad. The same is doubly true of the exploitive, covetous corruption of the pigs. There is a lot of cleverness in the story. There were also many points--starting very early on--where I shook my head, thinking, "How can they be so naive, so trusting?"
The last few pages, including the final dialog and observation, struck me as relatively abrupt. This did force me to reconsider the entire book in a different light based on the conclusion, though, which further content may have allowed me to overlook.
Overall, this is a good read that makes you think.