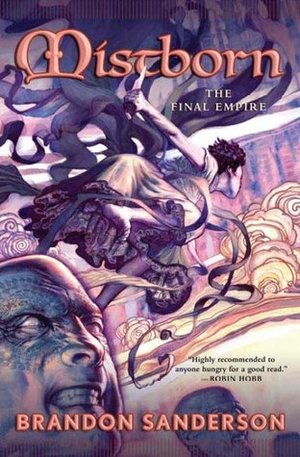 Brandon Sanderson
Brandon Sanderson, fantasy's newest master tale spinner, author of the acclaimed debut Elantris, dares to turn a genre on its head by asking a simple question: What if the hero of prophecy fails? What kind of world results when the Dark Lord is in charge? The answer will be found in the Mistborn Trilogy, a saga of surprises and magical martial-arts action that begins in Mistborn.For a thousand years the ash fell and no flowers bloomed. For a thousand years the Skaa slaved in misery and lived in fear. For a thousand years the Lord Ruler, the "Sliver of Infinity," reigned with absolute power and ultimate terror, divinely invincible. Then, when hope was so long lost that not even its memory remained, a terribly scarred, heart-broken half-Skaa rediscovered it in the depths of the Lord Ruler's most hellish prison. Kelsier "snapped" and found in himself the powers of a Mistborn. A brilliant thief and natural leader, he turned his talents to the ultimate caper, with the Lord Ruler himself as the mark. Kelsier recruited the underworld's elite, the smartest and most trustworthy allomancers, each of whom shares one of his many powers, and all of whom relish a high-stakes challenge. Only then does he reveal his ultimate dream, not just the greatest heist in history, but the downfall of the divine despot.But even with the best criminal crew ever assembled, Kel's plan looks more like the ultimate long shot, until luck brings a ragged girl named Vin into his life. Like him, she's a half-Skaa orphan, but she's lived a much harsher life. Vin has learned to expect betrayal from everyone she meets, and gotten it. She will have to learn to trust, if Kel is to help her master powers of which she never dreamed.Readers of Elantris thought they'd discovered someone special in Brandon Sanderson. Mistborn proves they were right.

@booklover85
Reviewed: 2021-05-16
the first part of the saga is amazingness itself! truly original and should be a to read book for every true epic fantasy lover!
@kirbyb
Reviewed: 2021-02-04
4.44
@blackfrost345
Reviewed: 2020-11-21
I took me a while to get into this book, around page 120, but once I did I didn't want to stop. The Magic system was amazing and well thought out. The worldbuilding was just brilliant.
Kelsier and Ham were my favorite characters.
This book solved most of the mysteries but also promised more for the series

My most memorable moments
Kelsier studied the boy. “What’s your name, son?”
“Lestibournes.”
Kelsier raised an eyebrow. “That’s a mouthful. You don’t have a nickname?”

You saw how that skaa gentleman treated me? People don’t like us, my dear. The idea of someone who can play with their emotions, who can ‘mystically’ get them to do certain things, makes them uncomfortable. What they do not realize—and what you must realize—is that manipulating others is something that all people do. In fact, manipulation is at the core of our social interaction

Breeze sighed, shaking his head. “What would you say if you knew I’d Soothed you on three separate occasions during our conversation?”
Vin paused. “When?” she demanded.
“Does it matter?” Breeze asked

“Women?” Elend asked. “Women are like . . . thunderstorms. They’re beautiful to look at, and sometimes they’re nice to listen to—but most of the time they’re just plain inconvenient.”

Everything costs money,” Ham said. “But, what is money? A physical representation of the abstract concept of effort. Well, wearing that uniform for so long was a pretty mean effort. I’d say that this vest and I are even now.

“Wasing the was of brightness,” Spook said. “Nip the having of wishing of this.”
“Ever wasing the doing of this,” Kelsier agreed.
“Ever wasing the wish of having the have,” Ham added with a smile. “Brighting the wish of wasing the not.”
Breeze turned to Dockson with exasperation. “I believe our companions have finally lost their minds, dear friend.”
Dockson shrugged. Then, with a perfectly straight face, he said, “Wasing not of wasing is.”
@yugmodnar829
Reviewed: 2020-04-01
I really wanted to like this and I’ve tried for almost a year to get through it. Unfortunately this book isn’t good and I hear it doesn’t get any better. It’s too bad I won’t get the references and the lore from this series but it just isn’t worth my time to put off his other (amazing) books trying and failing to read this one.

- Dropped 41%
@enlasnubess
Reviewed: 2020-02-26
*No Spoilers*
I learnt about this book via the podcast http://www.writingexcuses.com/ , where the author, Brandom Sanderson, participates actively and mentions a few times this book. I was really intrigued byt the way he had constructed the story. He never gave any major detail away in the podcasts, just enough to get you interested.
I added it to my to-read list and it wasn’t until my boyfriend began listening to the audiobook and told me how hooked he was on it, that I decided to read it. (By the way, I haven’t listened to the audio book but apparently the narrator is amazing)
Anyway, Mistborn is one of those books that gets you hooked from the beginning and when you finish the book you realize how every single passage of it had been planned in advance very meticulously... I love the world that it depicts, as horrible as it is, and the way it manages to mix science fiction and fantasy, and introduce it in a world of EPICNESS (I don’t know how else to describe it). But what I loved the most is how in this world, magic kind of makes sense, it is not just moving a wand and making a rabbit appear. The main characteristic of magic here is that every action has a reaction, so that battles are formed around a completely new strategy never seen before. The strategies used here are different.
Anyway, I consider this a must-read and recommend it to anybody who likes science fiction and fantasy books.
@sphritzglick
Reviewed: 2019-04-19
Dark world? - check
Corrupt aristocracy? - check
Unbeatable enemy? - check
The Crew? - check
Thief hero? - check
Well defined power system? - check
Fantastic book? - check
this probably will be addressed in the next book, but if March was not tortured and killed, then who told the Lord Ruler about Renoux? This seens important and seens no one in the crew thought about it
If Vin burned the 11th metal and gold at the same time, and then her shadow killed the Lord Ruler shadow, would the Lord Ruler die?
The first time Sazed told Vin about Ferruchemy I though "so that is why her earring did appear in the story!"
@scaredofspiders
Reviewed: 2018-12-26
I had difficulties falling into this book at first. I didn't have any problems with any in particular thing, I just wasn't familiar with anything in the world it was portraying. I'm interested in reading the rest of the series. The novel stands alone pretty well but poses plenty of questions for the continuation.
Another problem I was no doubt having is my life is in the midst of some upheaval and it was hard to justify sinking into a fantasy world in light of real life. Depending on the rest of the series I'll probably read it again when I'm not balanced on the crux of major change.
@cwebb1977
Reviewed: 2018-01-25
Wie habe ich Sanderson bisher nur verpassen können?