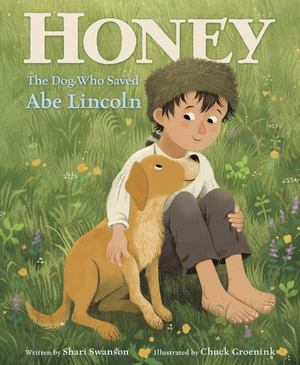 Shari Swanson, Chuck Groenink (Illustrator)
Based on a little-known tale from Abraham Lincoln's childhood, this charming picture book written by debut author Shari Swanson and illustrated by acclaimed artist Chuck Groenink tells a classic story of a boy, his dog, and a daring rescue. Deeply researched and charmingly told, this is the true story of one extra-special childhood rescue--a dog named Honey. Long before Abraham Lincoln led the nation or signed the Emancipation Proclamation, he was just a barefoot kid running around Knob Creek, Kentucky, setting animals free from traps and snatching frogs out of the jaws of snakes. One day, young Abe found a stray dog with a broken leg and named him Honey. He had no idea that the scruffy pup would find his way into Abe's heart, become his best friend, and--one fateful day--save his life.