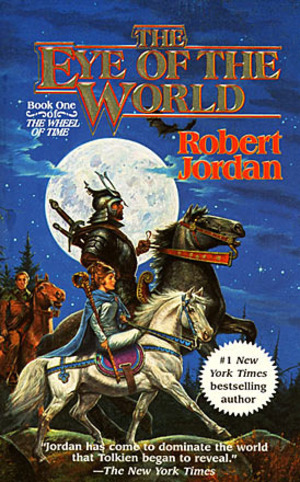 Robert Jordan
The Wheel of Time turns and Ages come and go, leaving memories that become legend. Legend fades to myth, and even myth is long forgotten when the Age that gave it birth returns again. In the Third Age, an Age of Prophecy, the World and Time themselves hang in the balance. What was, what will be, and what is, may yet fall under the Shadow.

@sharmas7
Reviewed: 2018-10-06
3
@bookaddictguide
Reviewed: 2017-12-07
I picked up THE EYE OF THE WORLD for a couple reasons — firstly that Alyssa was loving it and she’s been giving me great fantasy recs lately and secondly that Brandon Sanderson eventually picked up this series after Robert Jordan’s death. Where I went wrong though is that Alyssa actually didn’t recommend this one to me. She and Amy were reading it and I wanted to join in the fun too but I didn’t realize she had a very good reason for not recommending it to me too. It’s just not a Brittany book.

There was absolutely nothing wrong with the book but it’s just not my type of pacing, really. It felt slow and I even through the action scenes, I never really got into it. Part of it is that it’s the whole “journey” concept. It’s been compared to The Lord of the Rings (I guess) in that sense and that was one of the reasons I really couldn’t get into that series either (yes. It’s true). I’m not sure why that’s one of my issues but there’s something about it that prevents me from really getting into the book.

It wasn’t that I wasn’t liking the story but it always felt like it dragged. And for a 30-40 hour audiobook to drag. Ummm, that’s not good. I took the time to make it all the way to 40% and finally put it on hold after much debate. Then FINALLY four months later, I decided it’s time to DNF. I don’t have the heart to continue with the book and I shouldn’t have to PUSH to finish when I’m not enjoying it. This series is HUGE so what’s the point of pushing to finish a book if I’m not even going to continue the series? Just seems silly.

Again, not a bad book but I should have opened my ears before choosing it and not just picking it up because I didn’t want to be left out in my group of friends. SILLY. Also another case of a favorite narrator not being able to save a book. Don’t rely on that, friends. It doesn’t work.
@apartmolecules
Reviewed: 2015-10-18

A bit boring, which was expected considering the lenght of the series. Everything was moving really slow, and I didn't enjoy the scenery of imagined world. I didn't feel involved, I experienced none to very little affection towards the characters, except maybe Nynaeve - I was paying attention to her character development, and the way her love interest was handled disappointed me the most. But, I'm still thinking I may be rushing with conclusions, and should give a chance to at least two more books in the series before I state my definite opinion.