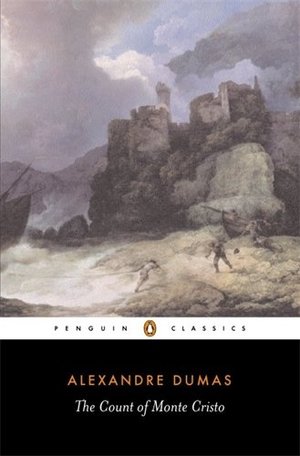 Alexandre Dumas père
Translated with an Introduction by Robin Buss.

@mkp
Reviewed: 2020-09-25
I read to halfway through and got bored. I thought the prison section was great, the rest of the book (more than half) is a revenge-centered plot that disinterested me.
@ellamc
Reviewed: 2019-05-19

Figure out where this quote comes from (and stop writing quotes randomly without noting pages) :

I felt myself pushed onward like a cloud of fire sent from Heaven to burn the cities of the wicked. I habituated my body to the most violent exercise, and my spirit to the severest trials. I taught my arm to slay, my eyes to behold suffering, my lips to smile at the most terrible sights. From being a kind and confiding nature, I made myself into a vindictive, treacherous and wicked man.

While it goes on and on with scene after scene, it clearly was written for newpaper or some long publication, but that's OK because there is more here than straight adventure or revenge - there is real growth in the character of Edmond Dontes. Great story - should be read in completion and certainly in this translation since the others are almost unreadable at this point in time/language.

This book is my favourite, I couldn't put it down, A. Dumas one of the greatest writers ever.

@electricidiot
Reviewed: 2015-09-30
What does it say about me as a critic when the best book Iâve read all year was first serialized in the 1840s? From start to finish thoroughly enjoyable, Alexandre Dumasâ 1200 page revenge epic The Count of Monte Cristo wastes little time in not thrusting the plot along, quite violently so at times, and includes within a brief, sketchy history of the return of Napoleon and his subsequent second defeat, a primer on hashish, and a proto-seed for the detective tale that would later blossom under Poe and Doyle.

The story is less well known than that in The Three Musketeers, though the outline is familiar to anyone whoâs spent time reading and watching noir fiction and movies. A young sailor, Edmond DantÃ¨s, engaged to be married to the beautiful MercÃ©dÃ¨s, is accused of a crime he has not committed by a man in love with his fiancÃ©e. The accuser, Fernand, is assisted in his perfidy by one of DantÃ¨sâ shipmates, Danglars, and an envious neighbor, Caderousse, as well as the political calculations of the young royal prosecutor Villefort. Cast into prison for fourteen years, DantÃ¨s befriends an AbbÃ© written off by prison officials as crazy who bequeaths to him on his deathbed a hidden fortune. Escaping from prison, DantÃ¨s finds the treasure, buys himself the title of Count, and returns to France to put into effect his long-nurtured schemes of revenge.

All of that takes place within the novelâs first 250 pages. The remaining one thousand allows the plot of slow-planned revenge time to stretch its legs, look about, and move forward with the inexorable pacing of Fate. DantÃ¨s, now in his persona of the Count (as well as in other various disguises such as the Englishman Lord Wilmore and the Italian AbbÃ© Busoni), plots a revenge that capitalizes on each characterâs weakness and vanity.

Sensing the malevolence in Villefortâs young wife, he introduces her to a sleeping draught/poison of his own devising, with which she begins to poison members of the prosecutorâs family in an attempt to secure a sizable inheritance for her son by a previous marriage. Through one scheme after another he reduces the proud banker that Danglars has become to a penniless wreck. A similar betrayal in Fernandâs past is resuscitated in part by the Count and rises up to disgrace him permanently. Caderrouse destroys himself through his own base greed and cunning.

All of this unfolds with delicious grace, and you relish each move the Count makes in his ongoing revenge, but underneath it all, a creeping note begins to sneak into the story. When DantÃ¨s himself was sent to prison, it was an action aimed solely at him by the three conspirators, and yet the ripples of this violence stretched outwards, consuming his fiancÃ©e MercÃ©dÃ¨s; crippling the business of his former employer Morrel, who never found a young captain equal to DantÃ¨s; and crushing the life out of DantÃ¨sâ father, who eventually died of starvation. The Count comes to see, through his friendships with the next generation of all the major players, how his actions cause grief and suffering that extend beyond the targets of his own revenge.

This realization makes up the novelâs closing chapters wherein the Count mulls over the right of vengeance and the notion of redemption and comes to peace with his idea of a godly revenge. Partly this is inspired by an earlier episode when he is required to save the life of Villefortâs daughter as she is in love with (and is loved by) Morrelâs son Maximilian. But also a great deal of this has to do with DantÃ¨sâ love for MercÃ©dÃ¨s, as well as his newfound love for HaydÃ©e, a young Greek, daughter of the Ali Pasha, and his (DantÃ¨sâ) slave.

In fact, these are the twin threads around which the entirety of the story revolves, love and revenge. It is Fernandâs love for MercÃ©dÃ¨s that leads to his conspiracy against DantÃ¨s. It is DantÃ¨s love for MercÃ©dÃ¨s that keeps him alive in prison. It is Maximilian Morrelâs love of Valentine Villefort that saves her life, as much as it is DantÃ¨sâ love of Maximilianâs father. Likewise, Madame de Villefortâs love of her son directs her toward her poisoning scheme.

And while it is DantÃ¨sâ revenge that brings every character to a reckoning, there is in each of the charactersâ pasts delinquent accounts that eventually must be paid, a revenge against them by Fate of which DantÃ¨s is only the tool. Caderousseâs backstabbing and betrayals will eventually get the better of him; Villefortâs illegitimate child will also return to play havoc with his name and reputation; Danglarsâ cupidity will trap him in a banditâs layer; and Fernandâs own treachery will lead to his public humiliation.

In this, it is as if Dumas is saying that all wicked men carry within them the seeds of their own destruction, carry it close to their hearts as part and parcel of who they are. Those who live to a ripe old age without a calling to the judge, jury, and executioner of Fate are only blessed in that they never double-crossed a DantÃ¨s.

In part based on a true story, Dumasâ novel runs through its 1200 pages with a leonine hunger and rapidity. While he may have been paid by the line, the man was such an elegant craftsman that it is hard in thinking back through the novel to come up with any one part that could be successfully pared away without hurting much of the novelâs concerns and central conceits. To lose many of the complicated subplots would make a hash of not only DantÃ¨sâ schemes and plans, but would also fatally weaken Dumasâ central message of justified vengeance versus pure malevolence.

If there is any part of the Countâs character that at times must give the reader pause, it isnât his heartlessness toward his enemies or his financial profligacy en route to his revenge (he literally tosses around millions of francs), itâs that he lives so strongly for a certain structured effect. The scene of the Morrel family salvation, when DantÃ¨s, in his first act since coming to his wealth, rescues his former employer from ruin and suicide, plays itself out up to the very last second. This is no doubt Dumas playing suspense thriller with his readership, but it leaves somewhat of a bad taste. We are given a Count who prefers design to humanity, and while this is all very good for oneâs enemies, a bit more heart toward oneâs friends would be appreciated.

Itâs a minor enough quibble in well over a thousand pages that, let me repeat unequivocally, barely lets up or gives you time to turn your attention elsewhere. But it remains, long after other larger scenes have left my memory, as a kind of capricious cruelty. Perhaps we need to be somewhat frightened of the Count ourselves; perhaps it is a warning, slyly inserted well to the beginning of the revenge scenario. See, before you plot yourselves, the author seems to imply, see what inhumanity revenge can make you capable of. It is a haunting suggestion.
Item Posts
@ellamc1y 4mo
completed ... on 2019-06-02
@ellamc1y 5mo
began ... on 2019-04-02
@chrisquick1y 10mo
began ... on 2018-12-16
@nada5y 1mo
completed ... on 2013-10-12
@nada5y 1mo
began ... on 2013-09-16
© 2020 libib.com / All rights reserved