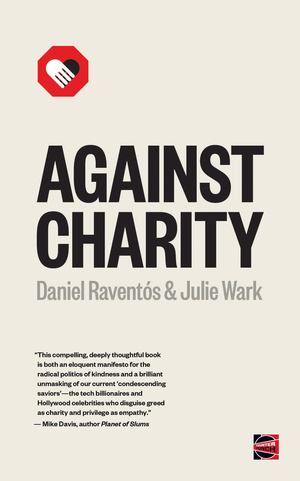 Julie Wark, Daniel Raventós
Charity is not a gift. Gift-giving implies reciprocity, an ongoing relationship. When requital is impossible, the act of giving remains outside mutual ties and charity becomes yet another manifestation of class structure, a sterile one-way act upholding the status quo. Vacuuming up all the profits thanks to a weak labor movement, lower taxes, and tax havens (thanks, lobbyists and loathsome politicians!), the global elite then turn around and remake the world in their own image with charitable donations that speak more of mean-spiritedness than generosity. Postmodern versions of nineteenth-century charity aim to keep wealth and power in a few hands, mocking our desire for greater income equality. Daniel Raventós and Julie Wark argue for an unconditional universal basic income above the poverty line and paid for by progressive taxation to both eradicate poverty and empower recipients--the result being the human right of material existence. The burning issue is not charity but justice. Daniel Raventós is the author ofBasic Income: The Material Conditions of Freedom. He is on the editorial board of the international political reviewSin Permiso. Julie Wark, the author ofThe Human Rights Manifesto, is on the editorial board ofSin Permiso, and lives in Barcelona.