Ballad of Songbirds and Snakes (a Hunger Games Novel) 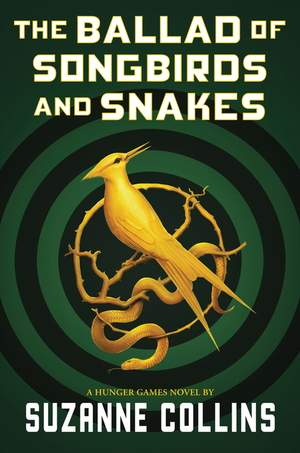 Suzanne Collins
Ambition will fuel him. Competition will drive him. But power has its price. It is the morning of the reaping that will kick off the tenth annual Hunger Games. In the Capitol, eighteen-year-old Coriolanus Snow is preparing for his one shot at glory as a mentor in the Games. The once-mighty house of Snow has fallen on hard times, its fate hanging on the slender chance that Coriolanus will be able to outcharm, outwit, and outmaneuver his fellow students to mentor the winning tribute. The odds are against him. He’s been given the humiliating assignment of mentoring the female tribute from District 12, the lowest of the low. Their fates are now completely intertwined—every choice Coriolanus makes could lead to favor or failure, triumph or ruin. Inside the arena, it will be a fight to the death. Outside the arena, Coriolanus starts to feel for his doomed tribute . . . and must weigh his need to follow the rules against his desire to survive no matter what it takes.

Not nearly as compelling as the original trilogy, but still oddly intriguing. The violence was actually much harder to stomach in this one. And everything felt much more overt here. I'm not sure I liked descending into "human nature" with Snow, and I'm not sure this was the book we needed right now. I do like it as a takedown of like 75% of Western classics (the ones I actually do like!) about this need to go back into nature and in nature you just become an animal who thinks only of survival and kills senselessly.

I also kinda eye-rolled at a lot of the connections to the original trilogy. I don't know how Snow didn't just auto flip out at Katniss if she was that connected to Lucy Gray.

The Ballad of Songbirds and Snakes is about Coriolanus Snow (yes, that President Snow) and his participation in the 10th Hunger Games as a student mentor. Snow and his cousin Tigris, who are both orphans, scrape by with their grandmother in their bare apartment in the Capital. When the 10th Hunger Games comes around, top students are offered, for the first time, to work as mentors to the tributes; a chance at a full ride scholarship to the elite university is also in it for the winner. Even though they lost everything in District 13, Coriolanus must keep up appearances and do everything he can to win. When he first ends up with the girl tribute from District 12, he's less than thrilled, but Lucy Gray Baird will soon turn his life in all kinds of directions as they fight to survive.

So I'm trying to find out where to begin. I know this book is getting such mixed reviews. When I first found out this book would be about Snow, I'll admit, it got me curious. How did he become the way he was in the Hunger Games trilogy? Welp, I sure found out just how self-absorbed, controlling, and cruel I already knew he was. I just got to see where it all kind of started. I already knew he was a villain, so I knew I wasn't going to like him by the end of the book regardless. It doesn't mean I couldn't follow his story. I liked reading about his past and making the connections.

The relationship (and that's if you can even call it that) with Lucy Gray was odd. His idea of love was not it. I'm going to leave it at that because I don't want to ruin anything else.

I did adore Lucy Gray. I rooted for Coriolanus more for her sake than for his. Her personality as a flirt caught me up and I wanted her to live and get back to the Covet. I loved her songs that make her connected to The Hunger Games trilogy.

I also liked seeing another version of Panem and learning more history about it. Honestly, I would love to have a history book just on Panem because it's just so interesting to me.

The book takes place in a time span of roughly two months. The book is long, but it covers so much that goes on. I don't see anything being able to be taken out without ruining the story. It's slow but I was never bored with it.

There's not a redemption arc for Snow. As I said, we already know how he ends up, but it doesn't mean I wasn't filled with slight anxiety as I turned the pages to see what happens. This book gives you more understanding, which, in a way, is more philosophical - Coriolanus has a lot to think about on the reasoning of humanity, war, conflict, and control. You get to see into his mind and observe just how it works. It's both scary and fascinating at the same time. Suzanne Collins has an excellent prose writing ability.

I know this book isn't going to be for everybody. The fact that is mostly psychological and philosophical is something that will divide people. But, I think if you loved and enjoyed the original trilogy, you'll enjoy this novel. It really makes you reflect on meaningful and difficult topics. There's a lot to talk about after.

"Young man faced with poverty fights between right and wrong."

I was stoked to find out that Suzanne Collins was writing another book in The Hunger Games series even if it was a prequel. I didn't know exactly what to expect when it comes to this book, but overall I really enjoyed it. It wasn't as good as The Hunger Games trilogy but it was definitely worth the 10-year wait. It is and should be read as its own book rather than as part of The Hunger Games series.

I loved the angle that Collins took for The Ballad of Songbirds and Snakes. You only see President Snow as this heartless and cold leader in The Hunger Games trilogy, but Collins did an excellent job in really humanizing President Snow as an 18-year old student who goes by Coriolanus. You can see his personal struggles outside of the Hunger Games, which makes you want to continue reading and get the answer as to why he became such a heartless and cold antagonist that you see him be in the trilogy.

When I first read the synopsis, I was really interested to see how Snow was a mentor to tributes when he was born as a Capitol citizen. It makes sense that since it's only the 10th Hunger Games that it still is in the experimental phase. It's interesting to see how the Hunger Games morphed into what they are in the trilogy and how Coriolanus Snow had a hand in a lot of it pretty early on. You can clearly see the struggle of young minds (not just Coriolanus) wrestling with and trying to figure out what is deserved versus being cruel.

The Ballad of Songbirds and Snakes also doesn't disappoint in all the symbolism and irony through the use of Greek mythology, especially when it comes to the characters.

Whether you read The Hunger Games series or not you will not be missing out because you don't know you're missing it. If you do read both the prequel and the trilogy you.

Lots of questions get answered in this novel such as the following:

- Why is Snow so obsessed with those roses?

- What is the real meaning behind the mockingjays?

- Why Snow hates Katniss Everdeen so much?

- Where do the songs Katniss sings come from? What are their real meanings?

- Who really is Tigris?

- Finally, how did Snow come to power? (This one you can figure out based on Snow's actions in this novel)

This novel also opens the door to more questions that can be answered in another novel, such as Tigris and Snow's fall out. If I was Collins, I would definitely write a prequel with Haymitch and incorporate the fall out there for reasons I can't explain without spoiling the pieces of The Hunger Games trilogy.

Whether you're reading this before The Hunger Games series or after, I suggest you read another read-through of the trilogy because there are so many different tidbits that are put into The Ballad of Songbirds and Snakes that you only see in The Hunger Games trilogy. This is definitely worth the read!