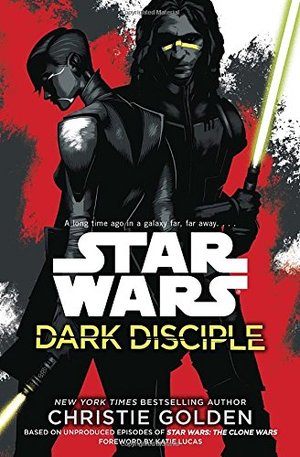 Christie Golden
Adapted from official unaired scripts from Star Wars: The Clone Wars, this new novel features one of the great anti-heroines in franchise history. When the Jedi target Count Dooku, they turn to his former apprentice, bounty hunter Asajj Ventress, for help in getting close to the dangerous Sith Lord. But as sparks fly between Ventress and Jedi Master Quinlan Vos, a web of secrets, betrayals, and unexpected alliances jeopardizes their mission—and all those who oppose the dark side.

It was amazing how quickly I fell back into the Star Wars EU with this book. I hadn't read any since Disney came in with their massive wrecking ball, and declared all the stories and characters that I loved to be merely Legends.

Personally meeting Christie Golden at a Convention inspired me to give it another chance. Her Fate of the Jedi story line is one of my favorite Legends, and if she was willing to continue as a writer in the new canon, the least I could do as a fan was give it a second shot.

As for the book itself, absolutely loved it!

I always thought Ventress was an interesting character, and I was happy to see her fleshed out further then you were seeing in the cartoons. Golden really captured her shattered emotional state similar to the lines that you see Vader take later in the series. You can't go wrong with a good redemption story, they are a staple of many of the best characters in the EU.

You can really start to see how desperate the Jedi Council is getting, questioning itself, and with Kenobi and Yoda resorting to darker and darker methods. Quinlan Vos was a relatively new character to me, but his story arc here will have me looking and watching for him in other stories.

You get to travel along to many recognizable worlds; Coruscant, Dathomir, Mustafar, and Christophsis to name a few. Each place offers its own eccentricities that only end up playing a small part in the overall plot, but it wouldn't be Star Wars without getting to visit at least a few along your journey.

I guess I will have to find some of the other new Canon stories, and give them a shot. I wasn't a fan of The Force Awakens, but the books seem to be better than the movies. If they keep getting amazing authors like Christie Golden and Timothy Zahn back in to shape their new galaxy, maybe it won't quite seem as far, far away from the Legends as I feared they would be.