Angels of Death: Inside the Bikers' Global Crime Empire 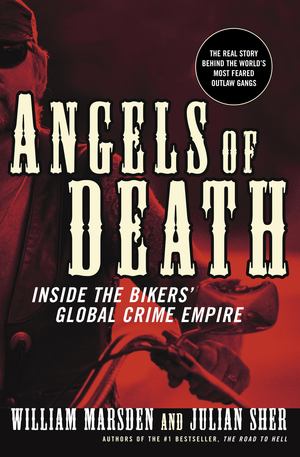 William Marsden
The award-winning authors ofThe Road to Hell: How the Biker Gangs Are Conquering Canadabring us a definitive, up-to-the-minute account of the Hells Angels and the international biker network. Marsden and Sher explain how the expansion of America’s foremost motorcycle gang has allowed this once ragtag group of rebels, outcasts and felons to become one of the world’s most sophisticated criminal organizations. While the media has continued to toast the Hells Angels California leader, Sonny Barger, as an American legend, the facts tell another story – they are America’s major crime export. With an estimated 2,500 full-patch members in 25 countries, the Hells Angels have inspired a global subculture of biker gangs that are among the most feared and violent underworld players. Angels of Deathtakes readers to Arizona, inside the biggest American police undercover operation to infiltrate the bikers; to British Columbia where wealthy bikers dominate the organized crime pyramid; to Australia where the “bikies” shoot it out with police; to Curaçao where terrorist organizations funnel drugs to Dutch bikers; and to the streets of Oslo, Copenhagen and Helsinki where a murderous biker war saw rocket attacks and bombs turn Scandinavia into a war zone. For the first time, police officers who have infiltrated biker gangs tell their secrets – revealing the challenges, fears and horrors they’ve discovered going undercover. Sher and Marsden take the reader behind the latest headlines to tell the story of how the Hells Angels became so powerful, and how the police – with only a few successes – have tried to stop them. Excerpt fromAngels of Death: Three murderous evenings, three different continents, three faces of the Angels of death: the killing of innocents, the killing of fellow bikers, and the killing of cops. Not to mention the hundreds of thousands of lives ruined, brains fried, bodies withered by the methamphetamines, cocaine and other drugs pushed by the bikers. And yet while the body count kept mounting, Sonny Barger, the Californian patriarch and international leader of the Hells Angels, was being feted by the international media as he promoted his latest bestselling book. Even the usually thoughtful British press fell for the rebel Yankee. The Times called him, “affable, big-hearted, warm.” The Independent labelled him an “American legend.” And in many ways he is.

@woodylv
Reviewed: 2020-02-14
A well written book about the Hells Angels Motorcycle Gang. This book needed to be written. There are far too many victims of the Hells Angels that have never had a chance to receive justice. This book will make many people examine the perception they have of the Hells Angels gang, its leaders, and the other outlaw motorcycle gangs that exist.
Item Posts
No posts
© 2020 libib.com / All rights reserved