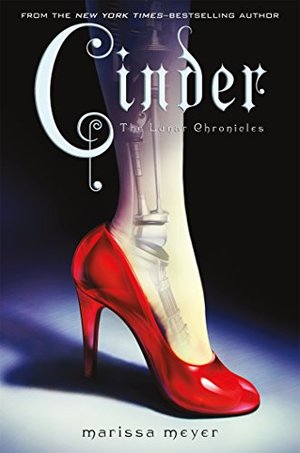 Marissa Meyer
Humans and androids crowd the raucous streets of New Beijing. A deadly plague ravages the population. From space, a ruthless lunar people watch, waiting to make their move. No one knows that Earth’s fate hinges on one girl. . . . Cinder, a gifted mechanic, is a cyborg. She’s a second-class citizen with a mysterious past, reviled by her stepmother and blamed for her stepsister’s illness. But when her life becomes intertwined with the handsome Prince Kai’s, she suddenly finds herself at the center of an intergalactic struggle, and a forbidden attraction. Caught between duty and freedom, loyalty and betrayal, she must uncover secrets about her past in order to protect her world’s future.  Marissa Meyer on Cinder, writing, and leading menWhich of your characters is most like you?I wish I could say that I'm clever and mechanically-minded like Cinder, but no—I can't fix anything. I'm much more like Cress, who makes a brief cameo in Cinder and then takes a more starring role in the third book. She's a romantic and a daydreamer and maybe a little on the naïve side—things that could be said about me too—although she does find courage when it's needed most. I think we'd all like to believe we'd have that same inner strength if we ever needed it. Where do you write?I have a home office that I've decorated with vintage fairy tale treasures that I've collected (my favorite is a Cinderella cookie jar from the forties) and NaNoWriMo posters, but sometimes writing there starts to feel too much like work. On those days I'll write in bed or take my laptop out for coffee or lunch.If you were stranded on a desert island, which character from Cinder would you want with you?Cinder, definitely! She has an internet connection in her brain, complete with the ability to send and receive comms (which are similar to e-mails). We'd just have enough time to enjoy some fresh coconut before we were rescued. The next book in the Lunar Chronicles is called Scarlet, and is about Little Red Riding Hood. What is appealing to you most about this character as you work on the book?Scarlet is awesome—she's very independent, a bit temperamental, and has an outspokenness that tends to get her in trouble sometimes. She was raised by her grandmother, an ex-military pilot who now owns a small farm in southern France, who not only taught Scarlet how to fly a spaceship and shoot a gun, but also to have a healthy respect and appreciation for nature. I guess that's a lot of things that appeal to me about her, but she's been a really fun character to write! (The two leading men in Scarlet, Wolf and Captain Thorne, aren't half bad either.)

Cinderella was a favourite fairy tale of mine & I enjoyed seeing it updated to a sci-fi setting. While the characters were a bit flat - well, that didn't stop me enjoying the early Star Wars films. This novel reminded me more of them than any book I've read!

I would have appreciated more of a description of Kai, because if there is a physical description of him in later books that will strike a jarring note if he is different than how I've visualised him.
@inuvantem
Reviewed: 2019-02-06
3.5/5 stars

Yay! This book has been on my to read list ever since I came to goodreads and I finally read it.
I didn't love it, but I did like it. It's interesting, different, entertaining and sometimes downroght cruel. But it's also quite predictable. The 'shock' and the end was obvious from about 20% into the book. So that was a bit of a let down.
I'm pretty sure I'll read the next books, but maybe not right away.
@agandygirl
Reviewed: 2018-09-28
Aaaaaahhhhhhhh!!! OK - so yes...this is the retelling of the Cinderella story that I would imagine most readers are familiar with. I am not a writer but I have to think taking on the classic Cinderella story would be difficult. Can you keep your reader engaged enough in the story that they do not become bored? Can you bring in elements they are familiar with but mesh those with Cyborgs and Androids (yes I said Cyborgs and Androids) and make it believable and still carry forth the charm that every girl loves? Can your reader become engaged enough that they are up at 1 AM eagerly flipping pages? For me, the answer is yes! Am I giddy like a 7 year old...yes! Am I longing for the Prince and Cinder to reunite...yes!! Do I hope the wicked stepmother and the equally wicked "queen" get what is coming to them...yes! Similar to my feelings for "Of Beast and Beauty", I was captivated from the start. In the back of my head I knew the underlying story, the what next...the stepsisters, the ball, the slipper, and while this retelling captures all those fabulous characters and moments, I was still drawn into the story and it's many differences. Yes, the Prince...God love him...is Charming! I loved his character and his pursuit of the equally charming and fascinating character of our dear Cinder is so heartwarming.

Thank you to my fellow Goodreads Friends for turning me on to this one and I am even more thrilled that I do not have to wait to move onto other books in this series. I have no doubt I will gobble the series up and within a couple of weeks be eagerly awaiting 2015 for "Winter" to arrive.
@bookworm0719
Reviewed: 2018-05-07
This book was great! I read it in about 2 1/2 days because I could not put it down. Cinder is a retelling of Cinderella (shocker!) but with more science-fiction and fantasy elements. The story follows the main character Cinder who lives in New Beijing with her evil stepmother, Adri, and two step-sisters, Peony and Pearl. Cinder had a very traumatic event at the age of 11 that she has no recollection of but has gotten her to where she is today as a cyborg. There is a deadly plague called Letumosis that is affecting their world as more and more people are contracting it and being hospitalized. When Cinder’s stepsister, Peony comes down with the plague, Adri volunteers Cinder to join the Cyborg Draft, where she will be tested on for the antidote. No cyborg has lived through it because the virus kills them but Cinder finds out that she is immune to the virus and she becomes a test subject to find the antidote. Cinder works at the market as a mechanic and meets Prince Kai one day because he needs her to fix his android. Throughout the story they keep running into each other because Cinder has been volunteering to help find an antidote and visiting her stepsister Peony and Kai’s father, the Emperor, has also contracted the plague, so Kai has been visiting him as well. Kai eventually gets to asking Cinder to come to the ball with him, but Cinder declines. She doesn’t tell Kai, but she’s planning to run away the night of the ball. Just when things can’t seem to get any worse, we learn about a species called The Lunars, who inhabit the moon. The Lunars show up to Earth to negotiate with Prince Kai. In exchange for continued peace between their lands, their leader, Queen Levana, offers to marry him. While Kai, does not like Queen Levana, she offers him something that is hard to refuse. The Lunars require that all mirrors be removed while they are staying on Earth because they are able to use their minds to trick others into seeing or thinking something entirely different. So while Queen Levana is very beautiful, it is fake and mirrors will reveal the truth. The main reason I gave this a 4 rating is because Cinderella is not my favorite fairy tale and I think it is a story that is overused. However, I thought that Meyer did an amazing job with this story putting it into a sci-fi and fantasy world made it my favorite Cinderella version so far! I also wish that Cinder and Kai’s relationship was more, but I’m sure we will see more of that in the next story. I hope so! Luckily in this version one stepsister, Peony, actually enjoys talking to Cinder and Cinder considers her to be the only human friend that she has. But, Pearl is just the worst. There were definitely parts when I was reading that Pearl was making my blood boil. Overall, great story, great writing, amazing characters. I can’t wait to read the next book!
@kateminasian
Reviewed: 2018-03-07
I was super excited to read Cinder and it did not disappoint. I absolutely love fairy tales retold in different ways, and this was definitely a creative take on Cinderella. This was a very enjoyable read. I plowed through it, not really wanting to put it down, because I wanted to know how it ended. I'm looking forward to the next one, though it seems like it's going to be a while?

One thing I did notice about the book was that at times it could be a little predictable. Sometimes the big reveal was obvious before it happened (there were a few occasions when this was the case). That being said, though, it wasn't a distraction or a bad thing, it just meant that while the story was trying to be a bit mysterious, it was easy to guess what was coming next.

I also liked the characters. While Cinder was a bit focused on being a cyborg, and what that meant for her, her interactions with her sister and the prince gave her a depth past that internal dilemma.

At the end of the day, I very much enjoyed this book and would recommend it to anybody who likes young adult with a twist of science fiction and some dystopian action.
@courtlyn
Reviewed: 2016-07-26
Really liked the spin on the fairy tale, although I thought some things were made obvious that could have been more implied (calling the festival a "ball" and her adopted mother her "stepmother" just to make them match where we could have understood what they were matched too without the clarification). The main character is a little flat and the romance not so well founded, but I'll continue to read the rest of the series. Would recommend to people who likes these kinds of books. Reread (audiobook) 3/4/16
@lovly
Reviewed: 2016-06-07
I loved this book. I devoured it and all its fantasy. Marissa did an amazing job with this fairy tale meets scifi series. The rest of the series is incredible and I simply cannot wait to read the final book.
@OlliesAddiction
Reviewed: 2016-01-20

A great retelling of the classic fairytale!

I love the recent trend to remake classic fairy tales to match newer SFF tastes, and this one hits the mark spot on. This retelling of the classic Cinderella story casts a cyborg as the long suffering character, and changes the Medieval European Castle for a futuristic Chinese Empire. The Evil Queen is still set on being the most beautiful in the land, and has her eyes set on world domination as well. The storyline stays close to true with the classic, but the change of setting and time makes this an instant classic in my book.

This is the first book in the Lunar Chronicles, and the foreshadowing is there for the other 4 books in the series. I originally purchased the first 3, Cinder, Scarlet, and Cress in hopes of finishing them before the fourth book, Winter, was released this January, but they were eaten up by my TBR pile, causing me to miss the deadline. I now get to read all 4 at once, and I have to say that I am really looking forward to it.

Solid 5 stars and I will be recommending this one to all my friends.