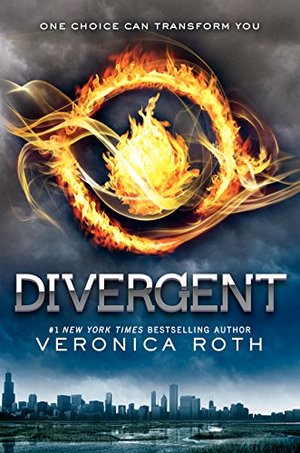 Veronica Roth
In Beatrice Prior's dystopian Chicago, society is divided into five factions, each dedicated to the cultivation of a particular virtue—Candor (the honest), Abnegation (the selfless), Dauntless (the brave), Amity (the peaceful), and Erudite (the intelligent). On an appointed day of every year, all sixteen-year-olds must select the faction to which they will devote the rest of their lives. For Beatrice, the decision is between staying with her family and being who she really is—she can't have both. So she makes a choice that surprises everyone, including herself.During the highly competitive initiation that follows, Beatrice renames herself Tris and struggles to determine who her friends really are—and where, exactly, a romance with a sometimes fascinating, sometimes infuriating boy fits into the life she's chosen. But Tris also has a secret, one she's kept hidden from everyone because she's been warned it can mean death. And as she discovers a growing conflict that threatens to unravel her seemingly perfect society, she also learns that her secret might help her save those she loves . . . or it might destroy her.Debut author Veronica Roth bursts onto the literary scene with the first book in the Divergent series—dystopian thrillers filled with electrifying decisions, heartbreaking betrayals, stunning consequences, and unexpected romance.

@alyssabusker
Reviewed: 2019-03-20
See other copy of divergent for review
@starclan50
Reviewed: 2018-06-28
Enjoyable and entertaining.
@mhmissey
Reviewed: 2018-04-21
Excellent start and a good history story for teenagers as to how Nazi Germany happened.
@jcallaway
Reviewed: 2018-01-17
This book kept me glued to my seat. I couldn't put it down. Good YA novel and should Bbe made into a movie. There is a lot of violence and a little bit of romance. But the five factions that were designed are modeled after certain aspects of our society. Lots of moral choices in this book. A must read.
@bookaddictguide
Reviewed: 2017-12-07
4.5 stars
I really enjoyed Divergent, but the story was quite different from what I was picturing! I thought it was going to be a lot more action and rebellion against the authority right from the start/towards the middle but it's really more about Tris finding her place and learning what she needs/wants to be (at first).
I love where the story took us though and after the end, I can't wait to pick up Insurgent!

Full review originally posted on The Book Addict's Guide: So before I started DIVERGENT, I knew three things: 1) It’s a dystopian. 2) Everyone loves it. 3) I wanted to read it.
I really didn’t know much about the plot as I like to keep myself in the dark and figure it out as we go along, so I was actually quite surprised at how the story unfolded. I think I expected a lot more action and a lot more direct conflict with the authority of society, but instead I found myself learning more and more about Beatrice and seeing her grow as a person. I actually quite liked it, but it threw me off a little bit.

I always enjoy true dystopian societies where we see the landscape in shambles as the citizens rise up and try to reconfigure their world and “do it better” than the generations who left this crumbling world for them. Divergent is definitely a true dystopian, and I really enjoyed learning about all of the factions and their different characteristics. Of course, I don’t ever think this would actually work in the real world, but it was interesting nonetheless!

I think I was hoping to learn more about being Divergent and what it really means closer to the beginning/middle of the story. We get little sneak peeks at how it makes Beatrice different from her peers, but I feel like I was left waiting too long to figure out what made a person Divergent and if there was anyone else out there who was like her that was forced into hiding as well.

As far as the ending goes, it’s not quite cliffhanger, but definitely left me on the edge of my seat waiting to pick up INSURGENT! Lucky me, I just bought it!
@dkwriter
Reviewed: 2017-07-26
Loved the writing, characters, primary and secondary plot lines.
Well-constructed action book with some swoony romance.
I loved how the main plot converged with the love-interest sub-plot, didn't see that one coming.
@spirit0
Reviewed: 2017-01-29
So this is the next big hit of YA lit? That's massively disappointing.

I admittedly read this because I love The Hunger Games, and everyone recommended reading this based off of that. Seriously? The Hunger Games isn't the best piece of prose in the world, but "Divergent" is legitimately terrible. There are moments when Veronica Roth tries to be so witty, to have her characters be funny, and she just makes me cringe. And if Tris keeps blushing throughout the next two books as frequently as she did in this one... I'm beginning to think this is more like Twilight than The Hunger Games.

Because the romance is also terrible. One of those love at first sight crappy things, where you have no basis of understanding why either one of them is attracted to the other. It was actually more interesting when there seemed to be a triangle developing, and then everything that happened with Al (the nice-seeming rival) was just narratively horrible.

Aside from Tris, and maybe Four and Eric (if I feel like being generous), none of the characters feels meaningful or fleshed out. And the best character was by far Tris's mom, who dies.

This book has more plot holes than the Hunger Games—which is significant to me because the whole *premise* of the Hunger Games is a plot hole. Here, I'll only rant about one thing, one really dumb, small detail that greatly pisses me off: You get to pick a new name when switching factions, apparently (or at least when you switch to Dumbness... my bad, I menat Dauntless!). So, Beatrice becomes Tris. For most of the book, we are led to believe Tobias chose the name Four. Because that's how this works, right? He would have chosen it after jumping off the roof into the Dauntless compound. Wrong, stupid! "Four" was apparently a nickname given to him after everyone realized he only had four fears (a record low). Okay. But he doesn't seem to like that nickname that much, so why wouldn't he introduce himself to Tris as Tobias? Why wouldn't his damn friends call him by Tobias if that was his real name? SOMEONE would call him by his real name, if he did not in fact change his name when he switched from Abnegation to Dauntless. Or am I supposed to believe he chose the name Four before he even went through any simulations and had any way of knowing that? Becuase I don't! I think Roth just did this stupidness of the dramatic reveal that he is Tobias, that he was the only other Abnegation transfer, and I just can't even...

I'd say I hope this series gets better. But from all I've heard, it gets worse.
@catiebug
Reviewed: 2015-08-26
Totally in love. Going to wait to read Insurgent till closer to the release of the last book. Going to be so hard to wait though.
@barbarasherry
Reviewed: 2015-07-01

This is my favorite book! :D I love the way Veronica Roth made the dystopian world and how she develops it. :D I love that this book made me think a lot and I'm hoping to reread it soon.