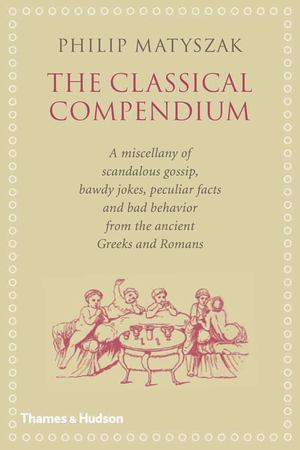 Philip Matyszak
Pliny did it, Plutarch did it, Xenophon did it. In fact most ancient writers were incorrigible collectors of miscellany, lively anecdotes, and after-dinner jokes. Here, writer and historian Philip Matyszak has collected his favorite incidents, wisecracks, and interesting facts about ancient Greece and Rome into a single volume.The stories have been selected for the insights that they give us into the ancient world, with its different perspectives on life, honor, and personal relationships. Many of the tales seem outrageous (such as a statue being tried for murder), though to the ancients these were normal enough. As the author comments, "human nature has not changed much over the last three thousand years, but the manner in which it finds expression is sometimes dramatically different."In these pages we find humorous quips by the emperor Augustus and wry observations by the philosopher Socrates. There are stories of ghastly crimes, incredible journeys, and some bizarre military mishaps, like the Macedonian troops who rushed to storm the walls of a Greek city, only to find that their ladders were six feet short.Did you know that ...a Roman suffering from illness might be cured if rubbed all over with a puppylentils cooked in saffron were a popular Greek aphrodisiacin the Roman marriage ceremony, the groom parts the bride's hair with a spearCaesar's horse had toes