Gold of Tolosa, The 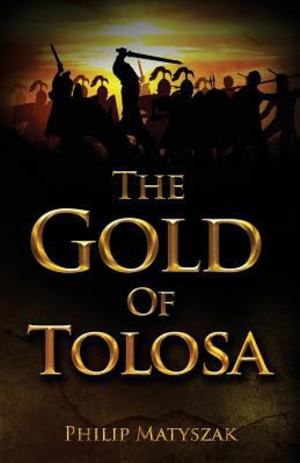 Philip Matyszak
Meet Lucius Panderius, war hero, connoisseur of fine wines and Germanic prostitutes - and the perpetrator of the biggest gold theft in history. This first novel by well-known writer and historian Philip Matyszak takes us from the mean streets of Rome to the even meaner streets of Gallic Tolosa in a journey filled with ambush, intrigue, battle and double-cross. In 105 BC Rome is faced with extinction, both from a huge army of invading barbarians and by a dark curse that has been festering for generations. It falls to Lucius Panderius to avert both threats, and incidentally to make himself richer than Croesus. Though fiction, The Gold of Tolosa is historically accurate and explains how enough loot to recapitalize a third-world economy was taken in a theft that really did happen. Whether Lucius is crossing swords with barbarian warriors or Roman magistrates, the pace is never less than frantic, and ancient Rome has never been more fun ... ABOUT THE AUTHOR Philip Matyszak has a doctorate in Roman history from St John's College, Oxford University and is the author of many books on Ancient History, including the best-selling Ancient Rome on Five Denarii a Day and Legionary: The Roman Soldier's (Unofficial) Manual. He teaches e-learning courses in Ancient History for the Institute of Continuing Education at Cambridge University. The Gold of Tolosa is the first historical novel in the 'Lucius Panderius' series. The Servant of Aphrodite is the sequel to The Gold of Tolosa and is the second novel in this series. For more information visit: www.matyszakbooks.com