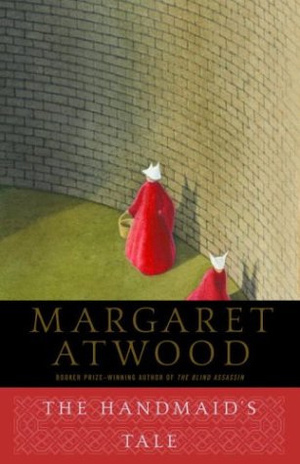 Margaret Atwood
In the world of the near future, who will control women's bodies?Offred is a Handmaid in the Republic of Gilead. She may leave the home of the Commander and his wife once a day to walk to food markets whose signs are now pictures instead of words because women are no longer allowed to read. She must lie on her back once a month and pray that the Commander makes her pregnant, because in an age of declining births, Offred and the other Handmaids are only valued if their ovaries are viable.Offred can remember the days before, when she lived and made love with her husband Luke; when she played with and protected her daughter; when she had a job, money of her own, and access to knowledge. But all of that is gone now....Funny, unexpected, horrifying, and altogether convincing, The Handmaid's Tale is at once scathing satire, dire warning, and tour de force.

@overbookedmimi
Reviewed: 2019-09-22
I will admit I was a bit disappointed with this one. It was on my TBR for so long and I was really looking forward to it but it was just meh overall. I didn't hate it but didn't love it. Loved the tv series...
@kmbiss
Reviewed: 2019-02-10
Dystopian world. Too real with today's culture
@swfenton
Reviewed: 2019-01-12
read
@scaredofspiders
Reviewed: 2018-12-26
The entire time I was reading this book, I was sick. Initially from a sinus infection and now with strep throat--probably. So I've fallen into it instead of a textbook because I'm not really up to the focus required to study
It's really disturbingly timely. And what a terrifying world. Supposed moral superiority justifying slavery beyond belief, dehumanization to the point of utter idleness. I don't actually know how to express how this made me feel. The right poison in the right ear for long enough and we might not tumble into Gilead but something even worse.
Read this.
@tracileemartin
Reviewed: 2018-12-04

Good plot, and very well written, but incredibly slow paced and over detailed. We ended up forcing ourselves to read it and decided that's not the kind of book we wanted to be reading. Will finish it on our own time.

@emilycreed23
Reviewed: 2018-06-30
Margaret Atwood at it again with her open-ended endings! I should've known better after the Netflix show Alias Grace. This book was dark, twisted, sad, and yet a page turner. I think maybe it's because you keep reading hoping for a certain outcome. It was certainly an interesting book with good commentary on relationships and social patterns. But would I recommend it? Probably not. I wouldn't want to put someone through the sadness.
@amirography
Reviewed: 2018-03-22
I'm pleasantly shocked by how well written, this horrifying, realistic fiction, was!
I cannot say I have not enjoyed its numerous delicate wordplays. The fact that this book is describing such miserable dystopia and yet having such a great authorship, is just wonderful.

This book is a much more plausible version of Orwell;s 1984. Which was centered around a dystopia that contained a hyper-misogynistic society.

Sadly, I have to state that, even being from a privileged gender (not considering being a non-binary), I recognized the painful similarities between the descriptions offered by this book and women of MiddleEast.

The last chapter was the most revealing. It visualizes how today's historians and academics, may express past's facts that underplay their horrifying implications. And how we underestimate how much of this book, has actually been, at best, the most civil norm of human history.

I loved this book, I believe it to become a memorable classic. And I highly recommend it to everyone!
@atroskity
Reviewed: 2018-01-03
In The Handmaid۪s Tale, Margaret Atwood has created a claustrophobic vision of the near-future that is as lyrical as it is chilling. Truly great speculative or dystopian fiction is based in reality; the horrors of the future must be believable to have power, and this is powerful stuff.

The Republic of Gilead, the name given to the society that was once America, is a place ruled by a shadowy government of religious fanatics who have imposed their values by terror and lies. Women no longer have access to the things they once took for granted, like a job, money or even literacy. In this new construct there exists a strict hierarchy, and within that hierarchy perhaps the strangest and most precarious role is that of Handmaid. The narrator of this tale is the Handmaid Offred, a woman who once had a life and a family, but is now reduced solely to her biology: she is a walking set of sexual organs whose sole reason for existence is to give birth to a child who will then be given to the family of a high ranking political official, to be raised within the new system.

Offred۪s story is told through observation, perception and intuition. As a woman, she is not privy to direct information of any kind, but must glean what she can from other women, who may or may not be trustworthy. This method of storytelling is particularly effective, as it only reveals things in brief glimpses, evoking the very feelings of confusion and loss that Offred is experiencing. Atwood has always excelled at conveying the inner turmoil of her characters, something I first noticed when reading Cat۪s Eye. She is a master of highlighting the nameless feelings that make up so much of our existence and creating a narrative from the bare bones of seemingly trivial observations.

The events of The Handmaid۪s Tale are presented as a reconstruction, and thus Offred is an unreliable narrator. However, this is unimportant; it is not the events so much as their emotional and personal impact that truly matter.

One of the most frightening and subversive elements of the story is not revealed until the end, in the Historical Notes۝ epilogue. It is revealed that it was not until the nations of the world had signed the Spheres of Influence Accord۝ that these things were able to happen. In other words, it was not until world peace was declared that the U.S. was able to turn it۪s fury on its own inhabitants and create their rigidly controlled state.

It is these elements, the personal and the ephemeral, in combination with a frighteningly plausible vision, that gives this book so much power and makes it, for me, a 5-star read.
@spirit0
Reviewed: 2017-01-29

The thing you need to read before we enter Donald Trump's America, no matter how you feel about the election results, or abortion. Written so damn well. I've never read Margaret Atwood before and felt pretty ashamed by it and damn was this a mistake.

Note: I've written longer thoughts about this for Scribd, but they haven't been posted yet.

Overall: Oh, it's playing in the same ballpark as The Hunger Games. Or rather... you know.... the other way around.

@lizzious
The story of the Handmaid's Tale was actually pretty intriguing. The fictional society described, including all its rules, is one that allows endless philosophical discussions. The details of the experiences the main character endures, from the lessons in the Red Center to her last day in The Commander's House, were exciting, sometimes suspenseful, to follow as the reader is made curious as to what will happen next. With these positive remarks on the book, you might frown at the stars I have given as rating for this book. Well, the reason is simple: despite all of the things mentioned above, I did not enjoy reading the book. A great plot, interesting characters, an intriguing world and situations the character is put into are not enough. The reading experience of a book doesn't depend on just these factors. Just like how a film with great story, amazing special effects, costumes and settings may have a strong basis, but the performance of the actors are as crucial to the viewing experience. An actor's weak acting may be so distracting that you do not pay much attention to the rest of the film, instead you focus on the flaws of the acting, at how unnatural or fake it looks like.

The same applies for this book. The reading experience was not pleasant for me. The writing is the factor here that ruined everything. There's no proper use of punctuation, such as quotation marks for speech between characters. I have to read a sentence multiple times to figure out whether it is something said by a character or just the narrator's own thoughts. Many times the flashbacks of the past and the present were way too abusively intertwined, lacking a proper transition from the one to the other. I have never read any book with such crappish writing. The writing was absolutely distracting and hindering the reading process in all possible ways. It was later revealed (in the epilogue) that the story was a transcription from recording tapes, and that the order of the tapes were just composed by professors, but this explanation for the unusual writing style does nothing to me. I don't care about the reason why the writing HAD to be crappish, it has already contributed to a bad reading experience and this cannot be undone.

Another factor that was in the back of my mind the entire time reading this book and that at times would jump to the foreground is the historical context of certain aspects of the society. Basically, the story of the book revolves fully around Handmaids. The entire existence of the occupation of the Handmaids is solely for reproductive purposes, because of declining births at the time due to sterility from pollution and sexually transmitted diseases. The Handmaid is kept at the house of a Commander, a high-ranking official, whom she has intercourse with during "the Ceremony", a ritual at which his Wife is present. When the Handmaid gives birth to a baby, the child will be the Commander's and his wife's, and the Handmaid will be transferred to another Commander to try again. If the Handmaid does not succeed in getting pregnant after three assignments, she will be exiled to the Colonies where they will die a horrible death.

The first thing that pops in my mind is In vitro fertilisation (IVF), a process by which an egg is fertilised by sperm outside the body. This treatment is common knowledge now, many women consider it, including celebrities. I happen to know people from my generation whose parents chose to have them fertilised this way. With this technology all the problems in The Handmaid's Tale wouldn't exist now or in the future. There wouldn't be women feeling degraded to be a tool, a "two legged womb", there wouldn't be wives having to bear the indignity of another women having sex with her husband in her presence, no men have to perform an embarrassing and humiliating act of fucking another women in front of his wife. No such problems would exist at all and the baby would be truly The Commander's and his wife's. Not of him and another woman. And if one of them is sterile, donor eggs or sperm would solve the problem.

Also, there wouldn't be the need of an outsider secretly impregnating the Handmaid, as it is a common event in the story. For instance, the medical doctor doing the check-up offered his 'services' to the main character to help her get pregnant as time is running out for her, and the Wife arranged the family's chauffeur to have sex with her for the same reason. In both cases it is claimed that the Commander will never know the baby is not his. Another thing that immediately pops in my mind would be DNA. It is impossible this present day and certainly in the future to get away with a baby that is not his just like that.