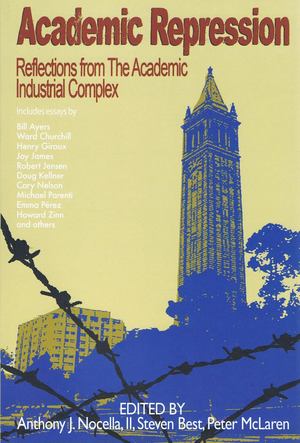 Anthony J. Nocella (Editor), Steven Best (Editor), Peter McLaren (Editor)
"This book puts the lie to the myth of academic freedom and that the university is an unabashed training ground for radicals."--Richard Kahn, University of North Dakota "Essential reading for anyone concerned about the stifling of dissent and free expression in academia and beyond."--Uri Gordon, author ofAnarchy Alive! Since 9/11, the Bush administration has pressured universities to hand over faculty, staff, and student work to be flagged for potential threats. Numerous books have addressed the question of academic freedom over the years; this collection asks whether the concept of academic freedom still exists at all in the American university system. It addresses not only overt attacks on critical thinking, but also--following trends unfolding for decades--engages the broad socioeconomic determinants of academic culture. This edited anthology brings together prominent academics writing hard-hitting essays on free speech, culture wars, and academic freedom in a post-9/11 era. It's a powerful response to attacks on critical thinking in our universities by well-respected scholars and academics, including Joy James, Henry Giroux, Michael Parenti, Howard Zinn, Robert Jensen, Ward Churchill, and many more. Anthony J. Nocella II is completing his PhD work at Syracuse University. Steven Best, PhD, is an associate professor in the Department of Philosophy at the University of Texas, El Paso. Peter McLaren, PhD, is a professor of education in the Graduate School of Education and Information Studies at the University of California, Los Angeles.