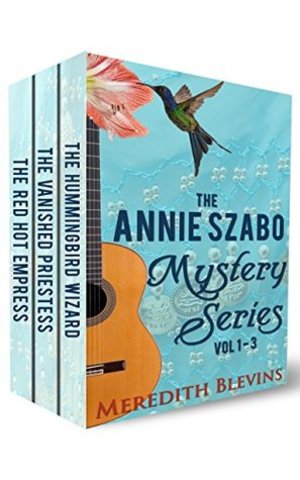 Meredith Blevins
One of the most original detective duos in fiction: A freelance journalist and her Gypsy mother-in-law! Publisher’s Weekly said: “Fascinating gypsy lore, unforgettable characters and a wicked sense of humor...” A dash of the paranormal too. Now you can get Meredith Blevins’s entire 3-book Annie Szabo Mystery series— two of which were Library Journal’s TOP FIVE picks in two successive years-- at the irresistible price of $6.99! Freelance journalist Annie Szabo has a way of attracting… unusual experiences. Together with her pushy mother-in-law Madame Mina, the combination is as combustible as a Gypsy funeral. These two are as funny as they are clever, and their hilariously querulous relationship is the real fun of the supernatural cozy series. Once you marry into a Gypsy clan, just try to get out! Annie Szabo loved her husband, but after his death, she was only too happy to leave his outrageous clan behind, especially Madame Mina, tarot reader, psychic advisor, and philosopher – with her signature accessories: a man (or two) and her red pumps. Some might call them madcap, zany, eccentric; but really one word says it all: Gypsy. Well, that, and juicy: pulsing with the rhythms – and juices – of life, birth, and death, with the California wine country wind in your hair. "Fascinating gypsy lore, unforgettable characters and a wicked sense of humor distinguish Blevins's highly unusual mystery debut... This stellar first, with its assured prose, will delight any mystery fan.” – Publishers Weekly in a STARRED REVIEW. THE HUMMINGBIRD WIZARD When her oldest friend and former brother-in-law, Jerry, turns up dead, Annie’s plunged back into the family she tried to leave behind. Annie knows Jerry’s murder was not the random street robbery the police believe it to be, but how is she supposed to prove it? As Annie turns amateur detective, THE HUMMINGBIRD WIZARD turns sexy. Truth to tell, it’s probably one of the sexiest mysteries you're ever going to read, but not because it's explicit--there’s just something about that…wizard. Lawyers, criminals, kink, aerial artistry, magic, and more murder mysteries, coupled with Blevins’s trademark humor, make for a delicious—and very funny-- supernatural cozy, with a healthy dose of romance. THE VANISHED PRIESTESS Annie is heartbroken when her neighbor and good friend, Margo Spanger, the owner-operator of a New Age circus that helps support a home for abused women, is murdered. She’s also frightened—her own daughter is an abused wife who’s a resident of Margo’s project. Along with Annie’s grandson. The plot thickens as quickly as a roux-- Margo's partner, Lili, goes missing the day of Margo's death, causing the shelter to fall into disarray, thus threatening its residents, and the detective team of Annie and Madame Mina swings into action! A fast, funny, and very original paranormal murder mystery. THE RED HOT EMPRESS Nudged by her Gypsy mother-in-law, Madame Mina, freelance journalist Annie Szabo writes an article about Jimmy Qi, an Asian boy with the power to heal through music, which is right down the Szabos’ paranormal alley. But their good intentions soon put the youngster in danger. Everyone, it seems, wants a piece of the rising star of San Francisco's Chinatown—including a shady evangelist, the FBI, the tongs, and a man who talks to dolphins. After two suspicious deaths, Annie and Jimmy go on the lam, not knowing whom to trust or why.