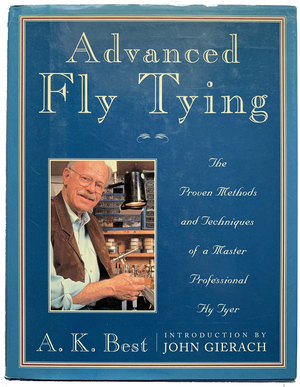 John Gierach
“Just as no two musicians will perform the same composition in an identical manner, fly tyers will use different techniques for tying the same fly pattern,” says A. K. Best in the introduction to ADVANCED FLY TYING. In his fourth book on the subject, A. K. offers his interpretation of how to apply advanced techniques for tying trout flies. Since Best has been teaching the art of fly tying for twenty years, it's hard to imagine an angler who wouldn't benefit from this book, which discusses: • How to choose a hair stacker, make dubbing needles, and sharpen scissors • Why you may need a rotary vise • How to tie Organza Spinner Wings, Magic Midge Larvae, Winged Bronze Beetles, Floating Hare's Ear Nymphs, and more • How to field dress flies to ensure a catch • Why the head is the most important part of a fly Each fly and technique is illustrated step-by-step with large color photographs and clear instructions. ADVANCED FLY TYING will be a treasured addition to any fly tyer's library. A. K. BEST has tied flies and fly fished for over thirty-four years, and his books on the subject of fly tying Production Fly Tying, Dying and Bleaching Natural Fly Tying Materials, and A. K.'s Fly Box- have become modern classics in fly-tying literature. He is also the Fly-Tying Editor for Fly Rod & Reel magazine, and contributes to the Mid-Atlantic Fly Fishing Guide, the Fly Fishing and Fly Tying Journal, and several websites. The Quill Body Dry flies he originated are produced by a leading manufacturer for sale throughout the world. He lives in Boulder, Colorado, and appears regularly in John Gierach's popular fishing adventures. Praise for A. K. Best: “A.K.'s tying instructions come from long experience as a professional fly tyer (a job where time really is money) but that's not all of it. Plenty of people are very good at something, but few are so acutely aware of what they're doing, how they do it and why, and almost none are able to explain it clearly. A.K. is among the best fly tyers I've ever seen, and he is the best instructor." - From the introduction by John Gierach “A. K. is one of the truly great tyers of our age. Because of his vast experience with trout, he has altered the way some favorite patterns are tied. Tie the flies the way he teaches in the book and use his advice for fishing them and you'll take more fish. That's a promise!" -Lefty Kreh “Few tyers are as outspoken and iconoclastic as A. K. Best. And few are right as often." -Ted Leeson