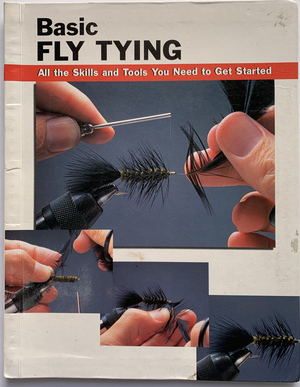 Wayne Luallen
This book is for beginners—those who have never I tied a fly or who have begun tying but still want a clear, detailed, step-by-step guide. We further assume that the person who buys this book wants to tie flies to fish with them and have thus built it around sequential instructions for seven effective and popular patterns. Several criteria influenced the selection of the pat- terns. First, they had to be relatively simple to tie. Sec- ond, they had to be proven on the water, patterns that expert fly fishers actually carry in their own boxes. We included no patterns simply because they're standard fare in beginner's books or because they illustrate a par- ticular technique that old-school tiers insist is required knowledge. Finally, we wanted a range of pattern styles—nymphs, dries, and streamers—not only to teach the various skills required for these styles, but also to equip the beginner with a useful, balanced fly box. The craft of fly tying is rich and deep. You can tie for a lifetime and keep discovering techniques and refining skills. If you watch four experts dub a body or tie in a wing, you'll likely see four slightly different approaches. This book does not attempt to cover every technique you'll ever need or every approach to every problem. And we don't want to suggest that any recipe here is so rigid that you shouldn't experiment or improvise. What we do propose is that with no previous experience you'll be able to tie the patterns in this book, and that having done so, you'll have not only some great flies, but a solid set of skills on which to build. Contributors Wayne Luallen is a master tier who teaches fly-tying courses around the country. His work has been featured in Fly Rod & Reel, Fly Tyer, and many other magazines, as well as in Tying the Classic Salmon Fly. He is the 1991 winner of the Buz Buszek Memorial Award from the Federation of Fly Fishers. Photographer Michael Radencich is the author of Tying the Classic Salmon Fly, and his photographs of flies also appear in Fishing Atlantic Salmon and Innovative Saltwater Flies. He holds degrees in photography from the University of Kansas and the Art Center College of Design in Pasadena, California. Illustrator John McKim is the author of Fly Tying: Adventures in Fur, Feathers and Fun. His illustrations have appeared in Flyfisher, BOOKS Saltwater Sportsman, and Western Outdoors. www.stackpolebooks.com