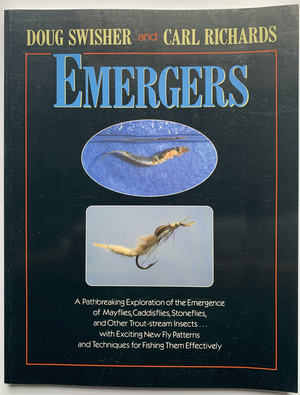 Doug Swisher and Carl Richards
"Swisher and Richards make hatch-making understandable. The ultimate, and most difficult, challenge of fly fishing can now be enjoyed by all dedicated fly fishers.”—Fly Fisherman The moments when trout-stream insects leave their immature stage at the bottom of a river and rise to the surface to hatch are the most important in their life cycles. Now they are most vulnerable to trout; now they are at the ideal stage for fly fishers to imitate. Yet this is one of the least understood and least written about phenomena. EMERGERS is a dramatic and pathbreaking book. Swisher and Richards have explored this magical moment of emergence for years. From extensive stream studies and the use of indoor aquariums, they have examined the process by which mayflies, stoneflies, caddisflies, midges, dragonflies, damselflies, and other aquatic insects emerge from their immature state to that of winged adults; and they have also explored the related phenomenon known as “invertebrate drift." Especially valuable are the many fascinating and highly effective new Swisher, Richards fly patterns and fishing techniques presented in EMERGERS all of which are bound to be welcomed by fly fishers the world over. Doug SWISHER and CARL RICHARDS are the co-authors of Selective Trout, Fly Fishing Strategy, and Backcountry Fly Fishing in Salt Water.