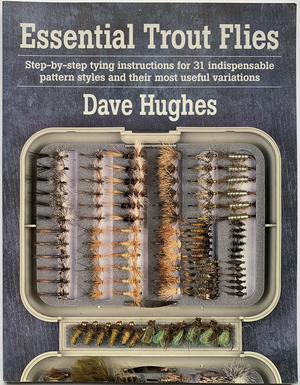 Dave Hughes
Dave Hughes began fly-fishing for trout in his early teens. For the last twenty years, he has made a study of trout streams and lakes, the natural foods on which trout feed, and the flies that take trout in the widest variety of circumstances. Dave has fly-fished for trout across the United States and Canada, as well as in Chile, Argentina, and New Zealand. He is founding president of Oregon Trout, was awarded life membership in the Federation of Fly Fish- ers, and in 1992 was presented the Vernon S. “Pete” Hidy life membership award by the Flyfisher's Club of Oregon for his contributions to angling literature. Dave's articles, essays, and fiction have appeared in Fly Fisherman, Fly Rod & Reel, Flyfishing, American Angler, Field & Stream, and Gray's Sporting Journal. He lives in Portland, Oregon, with his wife, Masako Tani, and daughter, Kosumo. Your purpose in working with Essential Trout Flies V is not to tie all the flies listed, but to select care- 1 fully and fill two to four boxes with flies that will take trout for you at most times, in most places. Those fly boxes should contain flies that cover the re- peated color themes of natural trout food forms. They should also cover the shapes and sizes of those various forms. That's why you choose a full box of dry flies, a wide array of nymphs, plus a few central wet flies and streamers. Your boxes should be filled for the most part with flies that resemble more than a single insect or other food form. For example, the Parachute Adams is at once an excellent searching dry fly and also a fair imitation of many mayfly hatches. The Muddler Minnow is a sculpin imitation but can be floated for a grasshopper or retrieved out from the bank as a chub or other baitfish pattern. Some of the flies in your boxes should be tied for specific hatches that you encounter often and must match to fool many trout. For example, the Olive Hairwing Dun is specific for little olive mayflies (Baetis), in sizes 18 and 20. It needs to be in the box because that hatch happens throughout the United States, in Great Britain, down in Chile and Argentina, and in New Zealand. You need flies that fish for many things, and you need flies that fish for ubiquitous things. You also need flies for things that your waters serve up to trout often and in abundance. You need to find a style in this book that matches their form, and then tie a size and color variation for the species over which you're fishing. All tying begins with pattern styles. The variations you work on them can be the standards I've listed or your own re- sponse to the trout foods that you collect, based upon the standards. Each fly that you tie, and drop into the boxes out of which you fish most often, should be one in which you have great confidence. That confidence can come because the fly has a long history of catching trout, such as the Royal Wulff. It can also come because you've tried the fly yourself and caught lots of trout on it when you weren't doing much with anything else. That's why Dave Whitlock's Fox Squirrel in size 14 or 16 is usually the first nymph I tie on, if nothing leads me in another di- rection. The first time I used it, I abruptly caught several nice trout in a row, in water where I hadn't been catch- ing a thing. That fly won my confidence and has worked ever since. The following flies have become the core that I carry in my own two essential boxes—the flies in the boxes constantly in my Sidekick II belt bag or the main pockets of my vest, wherever I go in the world of trout: Adams 14, 16 Olive Hairwing Dun 16, 18, 20 Pale Morning Sparkle Dun 16, 18 Royal Wulff 12, 14 Parachute Adams 14, 16 Elk Hair Caddis 12, 14, 16 Deer Hair Caddis 12, 14, 16 Stimulator 6, 8, 10 Adams Midge 18, 20 Griffith's Gnat 18, 20 Parachute Hopper, 10,12 Gold-Ribbed Hare's Ear 12, 14 Fox Squirrel 14, 16 Pheasant Tail 16, 18, 20 Olive Beadhead 12, 14, 16 Olive Scud 12, 14 Brooks Stone 6, 8, 10 Partridge & Yellow 12, 14 Starling & Herl 16 March Brown Flymph 12, 14 Leadwing Coachman 12, 14 Muddler Minnow 6, 8, 10 Black Marabou Muddler 6, 8, 10 Olive Woolly Bugger 8, 10, 12 Black Woolly Bugger 8, 10, 12 This is my list of essential trout flies--my list within the list. Yours should be different, based on where you live, the waters, and the way you prefer to fish. If you start with these, though, you won't find many situations in which you lack a fly that will catch trout.