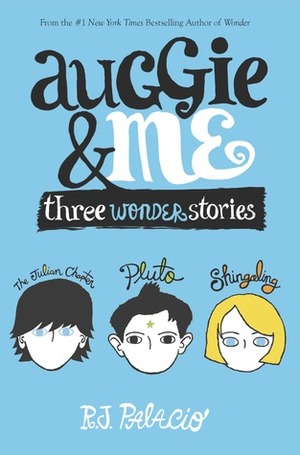 R. J. Palacio
Over 2 million people have read the #1 New York Times bestseller Wonder and have fallen in love with Auggie Pullman, an ordinary boy with an extraordinary face. Readers have also been treated to three stories offering a special look at Auggie’s world through new points of view. Previously only available in ebook, now they’ll be published all together in a gorgeous hardcover package!   These stories are an extra peek at Auggie before he started at Beecher Prep and during his first year there. Readers get to see him through the eyes of Julian, the bully; Christopher, Auggie’s oldest friend; and Charlotte, Auggie’s new friend at school. Together, these three stories are a treasure for readers who don’t want to leave Auggie behind when they finish Wonder.

New student Auggie Pullman attends Beacher Prep with an open mind, but meets unopen arms. Homeschooled until his first day of fifth grade due to his severe facial deformity, he has a hard time fitting in socially; many students reject him due to his unattractive physical features. With descriptive illustrations, his story is told through three different perspectives: The Julian chapter, Pluto, and Shingaling. Julian is one of the most important characters, as he loathes Auggie Pullman before he even meets him, starting much controversy and drama in the fifth grade. Will friendship between the two ever be an option? The Pluto chapter gives readers the ability to see a scope of Auggie’s life before Beacher Prep, as it is told by his childhood best friend, Christopher. The two grow apart after Christopher’s family moves away. Will they be able to keep their friendship despite the distance between them? The Shingaling chapter shines a new light on a student at Beacher Prep named Charlotte. Her story is unique, as she learns who her real friends are and is put into conflicting situations. Will she end up making the right choices? This book is easy to read, packed with detail and visuals, and moves at a natural pace. The plot and characters are well developed, making the story flow smoothly. Designed for pre-teens, it reveals relatable themes such as friendship, family, growth, and imperfection. One of the main themes is to not judge a book by its cover. With its goodhearted message and an infinite amount of meaning to be taken away, this is a recommended read. Submitted by: Lilly Greenblatt