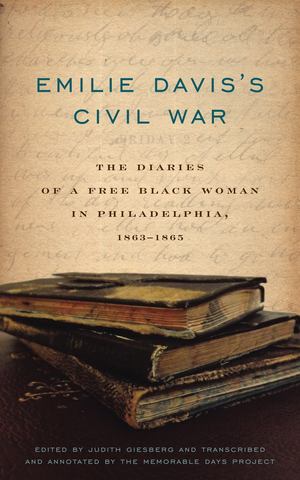 Judith Giesberg (Editor), The Memorable Days Project (Contribution by)
Emilie Davis was a free African American woman who lived in Philadelphia during the Civil War. She worked as a seamstress, attended the Institute for Colored Youth, and was an active member of her community. She lived an average life in her day, but what sets her apart is that she kept a diary. Her daily entries from 1863 to 1865 touch on the momentous and the mundane: she discusses her own and her community's reactions to events of the war, such as the Battle of Gettysburg, the Emancipation Proclamation, and the assassination of President Lincoln, as well as the minutiae of social life in Philadelphia's black community. Her diaries allow the reader to experience the Civil War in "real time" and are a counterpoint to more widely known diaries of the period. Judith Giesberg has written an accessible introduction, situating Davis and her diaries within the historical, cultural, and political context of wartime Philadelphia. In addition to furnishing a new window through which to view the war's major events, Davis's diaries give us a rare look at how the war was experienced as a part of everyday life-how its dramatic turns and lulls and its pervasive, agonizing uncertainty affected a northern city with a vibrant black community.