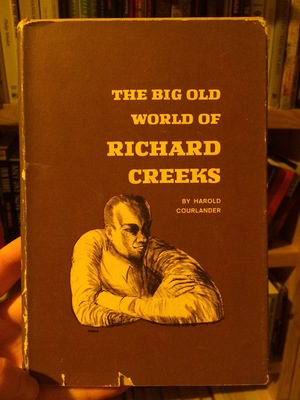 Harold Courlander
Out of small sensibility, novelist Harold Courlander has a first rate, first person social commentary on the South. Its hero is Richard a noble savage from the Delta who's ""walked Mississippi, Arkansas, Louisiana and Texas. Sometimes he it his ""Gold Chariot""; other times he was with Mamie Jackson, saying ""a better woman I never had"". But most of all he was giving out sweet and sour portraits of his fellow citizens at was found ""floating in the river"" after he'd Richard Creeks ""growed cotton corn"", worked on the railroad, dug storm pits, preached sermons, sang songs, lived through the two big wars; his American heritage went back to the slave trade and to this day he ""aint never voted; every time he'd try the Courthouse people would say:- 'Come back when you can read'."" His life was just ""lots of bits and pieces"" in a world that ""aint all good"" and not ""the kind of story you'd find in a book"", yet he ""enjoyed it"". Some, of course, might find it synthetic and sentimental; a radical like James Baldwin could call it updated Uncle Tomism. Nevertheless, Richard Creeks emerges as a very real person against a very real panorama, spouting a sardonic folksiness reminiscent of the current play Purlie victorious or the patter of comic Dick Gregory.