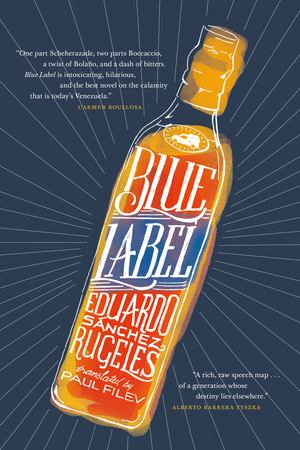 Paul Filev (Translator), Alberto Barrera Tyszka (Afterword by), Eduardo SAnchez Rugeles
"One part Scheherazade, two parts Boccaccio, a twist of Bolaño, and a dash of bitters.Blue Label is intoxicating, hilarious, and the best novel on the calamity that is today's Venezuela."--Carmen Boullosa "This deftly and idiomatically translated novel . . . a quest of sorts, as a high school student in Chávez's Venezuela tries to make sense of love and life . . . packs a punch on many levels: personal, political, and even mythic."--Kirkus Reviews (starred review) Eugenia Blanc, a young Caraqueñan and quintessential teenager at war with the world around her, has one aim: after graduating from high school, to abandon Venezuela definitively. She embarks on a spontaneous road trip in a banged-up Fiat with her rebellious classmate Luis Tévez, in search of her grandfather, the one person who can provide her with the documents that would allow her to leave the country. While Eugenia and Luis's tentative, troubled romance unfolds during the Chávez era, the story also looks back at Venezuela's "lost decade" of the 1990s, a time of intractable violence, inequality, corruption, and instability that led to Chávez's election. With an unvarnished fluidity that brings to mind Jack Kerouac and a crazy-ass playlist that ranges from REM to Bob Dylan to El Canto del Loco to Shakira,Blue Label is an audacious, dark novel with a gut-punch of an ending; the prize-winning first book by a writer who has cemented his reputation as a major young Latin American voice.