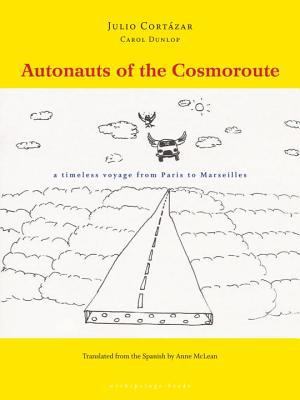 Julio Cortázar, Anne McLean (Translator), Carol Dunlop
Autonauts of the Cosmoroute is a travelogue, a love story, an irreverent collection of visual and verbal snapshots. In May 1982, Julio Cortázar and Carol Dunlop climbed aboard Fafner, their VW camper van, and embarked on an exploration of the uncharted territory of the Paris-Marseilles freeway. It was a route they¢d covered before, usually in about ten hours, but his time they loaded up with supplies and prepared for an ardous voyage of thirty-three days without leaving the autoroute. Along the way they would uncover the hidden side of the freeway and record The trip’s vital minutiae with light-hearted abandon. At roadside rest areas, armed with typewriters, cameras, and mutual affection, the authors composed this book.