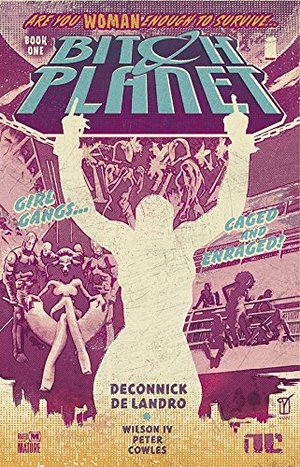 Kelly Sue DeConnick, Valentine De Landro
In a future just a few years down the road in the wrong direction, a woman's failure to comply with her patriarchal overlords will result in exile to the meanest penal planet in the galaxy. When the newest crop of fresh femmes arrive, can they work together to stay alive or will hidden agendas, crooked guards, and the deadliest sport on (or off!) Earth take them to their maker?

@mhmissey
Reviewed: 2018-04-21
This is awesome old school grindhouse woman's prison movie with quite a statement about society and the treatment of women.
@atroskity
Reviewed: 2018-01-03
(I received an ARC of this title from the publisher via NetGalley, in exchange for an honest review.)

If the future is undiscovered country, why does it feel like we۪ve been here before? That۪s why stories like this pack such a gut-punch; it۪s too real, too possible. Never mind the space travel or the other science fiction trappings, the story has been told before and it never loses its alarming fascination. Charlotte Perkins Gilman told the story of a woman imprisoned by patriarchal society in The Yellow Wallpaper over 100 years ago. A story not set in a future dystopia, but set completely in the real world of her own experience. Gilman used horror as her vehicle; DeConnick merely switches up the genre and shows how easy it would be to come full circle.

Kelly Sue DeConnick has taken all of the greatest hits of science fiction dystopiafascism, surveillance, manipulated media, death-as-spectator-sport, off-world detainmentand mashed them up with 70s-style prison exploitation, complete with badass afroed heroine and the obligatory group shower scene. There is a rich irony in her particular mix of styles, which she milks for all its worth: using a male-gaze genre that focuses on dehumanizing women for sexual kicks and turning those women into complete ass-kickers who will literally take down the voyeurs with their bare hands is pure genius. In this future, any woman who is considered to be noncompliant۝ is shipped to an off-world prison nicknamed Bitch Planet. Noncompliance can be anything from seduction and disappointment۝ (not putting out) to genetic error۝ (being born a twin) to being a bad۝ mother (undefined, but I can guess). The crimes۝ require nothing more than a complaint from a manfather, husband, stranger; the actual relationship doesn۪t seem to matter.

I don۪t think I can talk about Bitch Planet without making comparisons to The Handmaid۪s Tale. Atwood۪s novel set the standard for ass-backwards-patriarchy-gone-mad dystopia, and BP follows a line of direct descent. The tone and execution are completely different, but the effect is essentially the same: absolute, rage-inducing horror. As one reviewer put it, it۪s the kind of book that makes you feel good about being angry.۝*

But unlike Handmaid۪s Tale and, quite frankly, a lot of other feminist work, BP is intersectional in its look at women and women۪s lives. The majority of the lead characters are women of color, often poor and working class, which reflects not just a wider human experience than most literature, but also the very real likelihood that race is a determining factor in who is considered noncompliant. There is a moment where the racism of the future (which is just racism with a new vocabulary) is made very clear: people of color are referred to as skins.۝ The color-based terms once used are replaced by a more generic word, only to be just another way to describe someone as other,۝ with even more reductive effect. It۪s chilling, and all too real.

There is a reason real women all over the world have read these comics and branded themselves with the NC (noncompliant) tattoo, a punishment that is reclaimed as a act of defiance in Bitch Planet. What is compulsory in BP society is voluntary in this one; by choosing it willingly, we (I۪m considering one myself) head off the possibility that someday it COULD BE mandatory. We accept that this future is possible, and we know where we stand, since simply by living our lives with expectations of being treated as fully recognized human beings, we are being noncompliant with the basic rules of a patriarchal society. There are people even now that want to set us back by a hundred years because a woman who can make her own choices is a threat. Bitch Planet shows us what that could mean, in a powerful, visceral way. This first collection is just the introduction to the world and the characters, but it packs a punch from page one.

DeConnick۪s story is brought to life by Valentine De Landro۪s sharp-as-nails art. He captures the run-down sterility of the prison, the oversaturated outside world, and the smarmy politicking behind the scenes with equal skill, and his retro-fabulous covers and ads are amazing. The settings, the character design, the dark color palette with incongruous pops of neon; all seamlessly reinforce DeConnick۪s black humor and biting social commentary. He is especially adept at presenting a wide range of body types among the women- each one is unique and every imperfection highlights their humanity and how very close we are to their reality.

This is only the first trade volume, collecting issues 1-5, but I۪m definitely hooked for the long haul. Some people may be put off by how in-your-face DeConnick is about the violence and the cruelty, but it۪s absolutely necessary for the message. And watching the ladies kick ass even when everything looks hopeless is exactly the kind of noncompliance we need.

(My only complaint is that the trade doesn't include the feminist essays that are published in the single issues.)

*Daily Dot blurb from the back cover of Volume 1