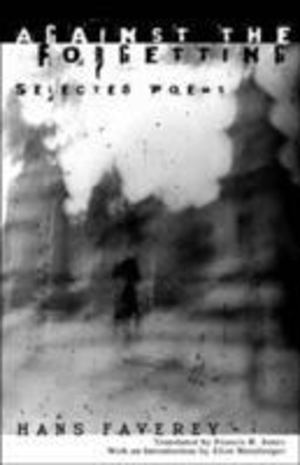 Hans Faverey, Francis R. Jones (Translator), Eliot Weinberger (Introduction by)
Against the Forgetting presents the work of an important twentieth-century Dutch poet, Hans Faverey. The first extensive selection of his poetry in English, this collection brings together poems from his eight published volumes of poetry spanning the years 1968 to 1990--the last volume,Default, he received only two days before his death. In addition, a selection of poems from a posthumous collection,Spring Foxes, first published in Holland in 2000, is also included. The translator Francis Jones writes, "Hans Faverey left behind a poetic structure of uniquely subtle richness and beauty, made from so little--a few words, surrounded by silence." Filled with a precision and arresting musicality comparable to the hermetic poems of Celan and Bronk, and as mysterious as the writings of Heraclitus and the German mystic Meister Eckhart, Faverey's poems, like Lichtenberg's lightning frozen in time, lash out, splintering systems and syntax--enlightening.