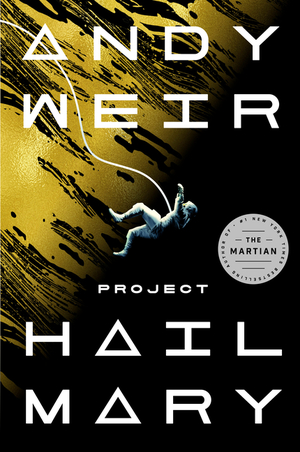 Andy Weir
Ryland Grace is the sole survivor on a desperate, last-chance mission—and if he fails, humanity and the earth itself will perish. Except that right now, he doesn’t know that. He can’t even remember his own name, let alone the nature of his assignment or how to complete it. All he knows is that he’s been asleep for a very, very long time. And he’s just been awakened to find himself millions of miles from home, with nothing but two corpses for company. His crewmates dead, his memories fuzzily returning, Ryland realizes that an impossible task now confronts him. Hurtling through space on this tiny ship, it’s up to him to puzzle out an impossible scientific mystery—and conquer an extinction-level threat to our species. And with the clock ticking down and the nearest human being light-years away, he’s got to do it all alone. Or does he?

This book started off as one thing, which was good but had some plot holes, then turned into something else that was way better (basically about best friends in space). I loved the redirection. That and the ending erased all my gripes about the absurdity of the Hail Mary project itself.

@ewan
Reviewed: 2021-10-25
Quite simply brilliant
@novastarscream
Reviewed: 2021-10-20
There was a lot of technical jargon, which I expected from this author, but nevertheless made it hard to stay focused at time. However I was enthralled by the relationship between the main character and Rocky, the idea of a non humanoid alien species and how that might work. The ending is also bittersweet and while the character doesn’t get exactly what he wants, in a way he does. The jumping back and forth helps keep you engaged and overall, excellent read.
@tmilano
Reviewed: 2021-10-01

This book started off as one thing, which was good but had some plot holes, then turned into something else that was way better (basically about best friends in space). I loved the redirection. That and the ending erased all my gripes about the absurdity of the Hail Mary project itself.

Not as tense and thrilling as the author's book, The Martian, but very intriguing and interesting. Andy Weir is a great writer, and the plot of this science fiction story is original and so plausible! This is science fiction that is based on science and yet pushes our imagination to the edges of what we know about the universe. The characters are superb, the dialogue is realistic and amusing. The pace moves along well and the there's genuinely surprising turns in the story. Don't be put off by the science part of this science fiction story. Anyone could read this and enjoy it. The themes of survival and friendship are highly relatable. Andy Weir's books are destined to become classics -- and I can't wait for the next one!

Excellent sci-fi book. Lots of plausible science, and some slow-burn mystery around every corner. This was a page-turner for me.