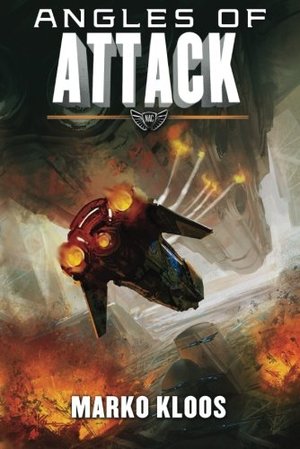 Marko Kloos
The alien forces known as the Lankies are gathering on the solar system’s edge, consolidating their conquest of Mars and setting their sights on Earth. The far-off colony of New Svalbard, cut off from the rest of the galaxy by the Lanky blockade, teeters on the verge of starvation and collapse. The forces of the two Earth alliances have won minor skirmishes but are in danger of losing the war. For battle-weary staff sergeant Andrew Grayson and the ragged forces of the North American Commonwealth, the fight for survival is entering a catastrophic new phase.Forging an uneasy alliance with their Sino-Russian enemies, the NAC launches a hybrid task force on a long shot: a stealth mission to breach the Lanky blockade and reestablish supply lines with Earth. Plunging into combat against a merciless alien species that outguns, outmaneuvers, and outfights them at every turn, Andrew and his fellow troopers could end up cornered on their home turf, with no way out and no hope for reinforcement. And this time, the struggle for humanity’s future can only end in either victory or annihilation.

With Angles of Attack, Marko Kloos really takes his characters out for a spin, and lets the SHTF in the battle versus the Lankies. Just like in the previous 2 books in the series, he keeps the pace up for the entire book. At the end of Book 2, the combined SRA and NAC task force is launching a defense of Fomalhaut B, leading directly into Angles of Attack, then a recon mission impossible, and the final mad dash of the task force trying to get back to Earth.

I love how you can read all 3 books, back to back, and they flow directly into one another, with just a few years missing between 1 and 2, and no time at all between 2 and 3. I am still in the process of finding book 4, Chains of Command, and eagerly waiting to see how far he can take the series. Book 5 Fields of Fire, will be a Valentine’s Day Gift in 2017, and is currently being finished by the author.  I have the Frontlines Requiem Comic book, and they are well worth picking up as icing on the amazing buildup in the books.

The climax in this one is the best of all 3! He finally let his heroes be true heroes without the usual questions of morality about whether or not to follow their orders. The Lankies tail the task force all the way back to Earth, setting up the all or nothing finale that we have been waiting for since they first appeared back in book 1. They temper the moment with the rushed wedding of Halley and Grayson, and then send them off on a honeymoon right into the middle of the battle.

Check out the author’s page at www.markokloos.com for more release updates as book 5 gets closer to being finished.