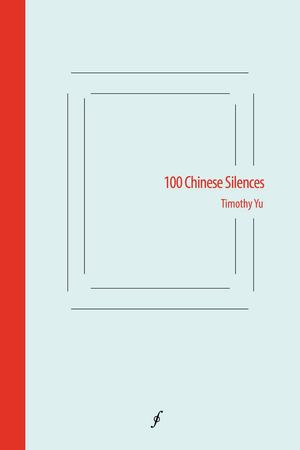 Timothy Yu
Poetry. Asian & Asian American Studies. LGBT Studies. Selected as the editor's selection in the 2014 NOS Book Contest. There are one hundred kinds of Chinese silence: the silence of unknown grandfathers; the silence of borrowed Buddha and rebranded Confucius; the silence of alluring stereotypes and exotic reticence. These poems make those silences heard. Writing back to an orientalist tradition that has defined modern American poetry, these 100 Chinese silences unmask the imagined Asias of American literature, revealing the spectral Asian presence that haunts our most eloquent lyrics and self- satisfied wisdom. Rewriting poets from Ezra Pound and Marianne Moore to Gary Snyder and Billy Collins, this book is a sharply critical and wickedly humorous travesty of the modern canon, excavating the Asian (American) bones buried in our poetic language. "Timothy Yu's first book of poems, 100 CHINESE SILENCES, brims with sharp, angry, sarcastic and tender poems. He delivers dazzling lines with the deadpan wit and precise timing of Buster Keaton, the stone-faced master of silence. In fact, I had not realized until now—and I mean NOW—that Keaton is really the Timothy Yu of silent films, while Yu is Yu, a slayer of dragons, who knows the millions of sinister and inscrutable ways the Chinese have been silenced in blockbuster films, best-selling novels, Broadway musicals and award-winning poems read on NPR, and closely scrutinized in graduate classes and parking lots of Asian fusion take-out joints with funny names. Not only does Yu make Ezra Pound and Gary Snyder stand on their pointy heads in ways that are illuminating and funny, but he also skewers Jeb Bush, Billy Collins, Mary Oliver, Marianne Moore, and Eliot Weinberger right through their bright yellow Chinese hearts. You got to love a poet who can do that and never miss his mark. I present you with Timothy Yu, noble Chinese archer and master poet."—John Yau "In Timothy Yu's hall of 100 "Chinese" poetic mirrors, puppies, blossoms, and hobbled feet clatter against the American grain, leaving wet prints as frowning emoji ciphers to rise up with a mighty bitch slap for Asian/American difference. These poems burn with gloriously wry disdain at the abundance of chinoiserie tinging modernist lineages of geopolitically "western" poetic traditions. By striking out at un-self-conscious performances of western cultural sophistication, Yu exposes these voices' indebtedness to emptied "Chinese" images. I pleasure in his poetry's mythic "10th century crystal penis," how it penetrates western imaginative impotencies to see otherwise. He's sharp, incisive, potty- mouthed, unapologetic, slippery, angry, urbane... His silences are fearsome and knowing. Fuck that yellow-faced hologram of Confucius! I want to hear what Timothy Yu has to say!"—Sueyeun Juliette Lee "I can't remember when I last read a book as necessary, and as wickedly fun, as Timothy Yu's 100 CHINESE SILENCES. Yu responds to, rewrites, and reforms a whole poetic tradition of Western representations of China and the Chinese, from Ezra Pound to Gary Snyder to Billy Collins. Yu wears his learning lightly, and his various parodies, pastiches, and campy retakes on the poetic tradition balance a love of the poetry he's spent a career studying with a necessary critical edge. Our age demands a re- assessment of old representations of the "mysterious east," and Timothy Yu has come through with exactly what we need. 100 CHINESE SILENCES has "breakthrough book" written all over it."—Robert Archambeau