Alexander Vvedensky: an Invitation for Me to Think 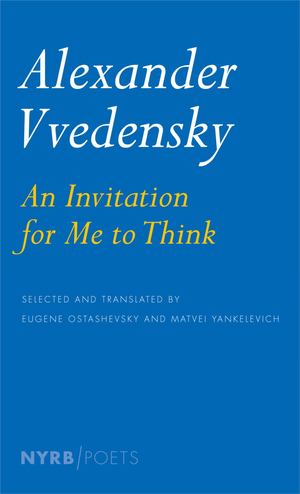 Alexander Vvedensky, Eugene Ostashevsky (Editor, Translator), Matvei Yankelevich (Translator)
Alexander Vvedensky, co-founder with the poet Daniil Kharms of OBERIU, a small avant-garde collective in late-1920s Soviet Leningrad, is the least known of major Russian twentieth-century poets. He stands apart like a dark star in a constellation that includes Mandelstam, Akhmatova, Pasternak, Tsvetaeva, Mayakovsky, and Khlebnikov. Younger than these poets by a decade, Vvedensky came of age under the Soviet system, when the language used to describe reality appeared to have lost all literal meaning. He saw his task to be "the poetic critique of reason" and claimed "time, death, and God" as his main themes. His poetry is suffused with a philosophical lyricism that recalls the ending of Wittgenstein's Tractatus Logico-Philosophicus. It can also get quite hilarious- the author had a day job as a children's writer. After incarceration from 1931 to 1933 for "literary sabotage," Vvedensky kept his poetry private, sharing it only with Kharms and others in their tiny underground circle of writers and philosophers. When war broke out in 1941, the authorities rearrested the pair as potential subversives- Kharms died in a prison asylum and Vvedensky in a prison transport. Both were only thirty-seven years old. Their manuscripts were published during the collapse of the Soviet Union, half a century after the deaths of the authors; An Invitation for Me to Think is Vvedensky's first collection to appear in English.