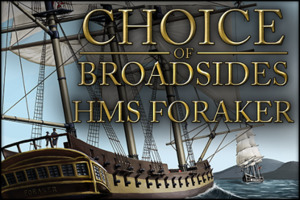 Android
Command a royal warship and destroy your enemies at sea! As a veteran navy captain in the world of Choice of Broadsides, you’ll fend off (smugglers, slavers, and) foes of the crown to seize your place in history. HMS Foraker is an 85,000 word interactive novel by Paul Wang, where your choices control the story. It's entirely text-based—without graphics or sound effects—and fueled by the vast, unstoppable power of your imagination. It’s 1813, and you’re a key sailor in the naval war between Columbia and Albion, where aggression is rewarded and cowardice can get you killed. If you seize enough treasure, you could be set for life – but hesitate against the enemy and you could end up facing the firing squad. Board enemy ships and force them to surrender, or use your connections to stay out of the fray. Will you steer your crew to glory, or go down in infamous defeat? What mercy will you show your prisoners? Can you control your composure while fighting a war? Revenge yourself on old rivals and reward your allies for their devotion. And whatever you do… Don’t give up the ship! Serve the queen or the king, with an all-male or all-female crew. Captain the powerful warship HMS Foraker. Train your crew for combat, with kindness or cruelty. Parley with smugglers, slavers, and other unsavoury characters for tactical advantage or personal gain. Inspire devotion from your crew, or sway your superiors back home. Confront storms, accidents, and other maritime disasters. Master the balance between bravery and cowardice, cunning and folly. Win glory, treasure, promotion, a knighthood, or even a noble title.