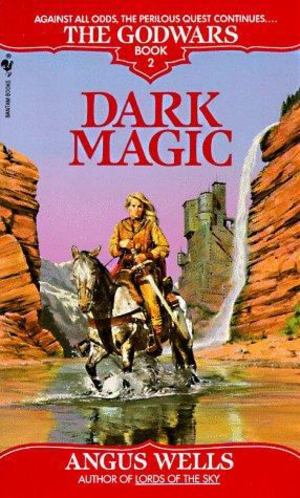 Angus Wells
Ages ago, when the First Gods ruled heaven and earth, they created two lesser deities to reign along with them. But these gods, Tharn and Balatur, were flawed. Their madness threatened creation itself — and thus they were condemned to an eternal sleep. Only an ancient book of spells holds the key to their release. Now an evil necromancer has obtained the book and hastens to Tharn’s hidden resting place with a plan as deadly as the god himself. Ancient prophecy points to the exiled prince Calandryll as the only one who can defeat the wizard — aided by a beautiful warrior woman, a hard-bitten mercenary, and Calandryll’s own uncertain powers. But first Calandryll and his companions must travel a kingdom racked by civil war, cross the rolling prairie of the fierce horse clans, and finally venture into the forbidden wastes and uncharted territories beyond. Enemies and foul treachery await, while the mighty Tharn, as if somehow aware of his imminent release, begins to stir…begins to dream…and all creation begins to quake. Dark Magicis the masterful second chapter ofThe Godwars,a stirring chronicle of high adventure by one of the most exciting new writers of fantasy. From the Trade Paperback edition.