Life and Traditions of the Red Man, The 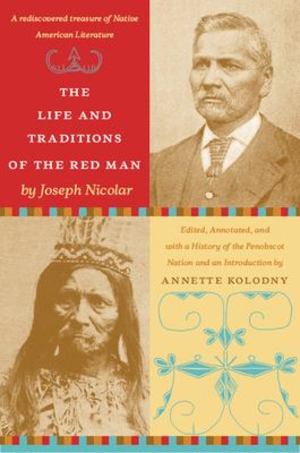 Joseph Nicolar, Annette Kolodny (Editor), Charles Norman Shay (Preface by)
Joseph Nicolar's The Life and Traditions of the Red Man tells the story of his people from the first moments of creation to the earliest arrivals and eventual settlement of Europeans. Self-published by Nicolar in 1893, this is one of the few sustained narratives in English composed by a member of an Eastern Algonquian-speaking people during the nineteenth century. At a time when Native Americans' ability to exist as Natives was imperiled, Nicolar wrote his book in an urgent effort to pass on Penobscot cultural heritage to subsequent generations of the tribe and to reclaim Native Americans' right to self-representation. This extraordinary work weaves together stories of Penobscot history, precontact material culture, feats of shamanism, and ancient prophecies about the coming of the white man. An elder of the Penobscot Nation in Maine and the grandson of the Penobscots' most famous shaman-leader, Old John Neptune, Nicolar brought to his task a wealth of traditional knowledge. The Life and Traditions of the Red Man has not been widely available until now, largely because Nicolar passed away just a few months after the printing of the book was completed, and shortly afterwards most of the few hundred copies that had been printed were lost in a fire. This new edition has been prepared with the assistance of Nicolar's descendants and members of the Penobscot Nation. It includes a summary history of the tribe; an introduction that illuminates the book's narrative strategies, the aims of its author, and its key themes; and annotations providing historical context and explaining unfamiliar words and phrases. The book also contains a preface by Nicolar's grandson, Charles Norman Shay, and an afterword by Bonnie D. Newsom, former Director of the Penobscot Nation's Department of Cultural and Historic Preservation. The Life and Traditions of the Red Man is a remarkable narrative of Native American culture, spirituality, and literary daring.