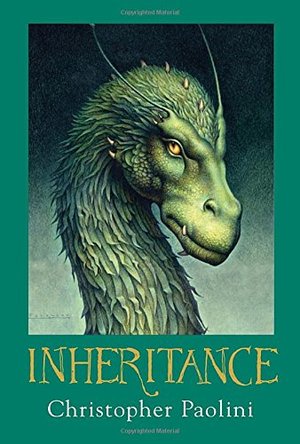 Christopher Paolini
Not so very long ago, Eragon—Shadeslayer, Dragon Rider—was nothing more than a poor farm boy, and his dragon, Saphira, only a blue stone in the forest. Now the fate of an entire civilization rests on their shoulders.Long months of training and battle have brought victories and hope, but they have also brought heartbreaking loss. And still, the real battle lies ahead: they must confront Galbatorix. When they do, they will have to be strong enough to defeat him. And if they cannot, no one can. There will be no second chances. The Rider and his dragon have come further than anyone dared to hope. But can they topple the evil king and restore justice to Alagaësia? And if so, at what cost?This is the much-anticipated, astonishing conclusion to the worldwide bestselling Inheritance cycle.Sneak Peek at Chapter Titles from InheritanceMooneaterTo Feed a GodBlack-Shrike-Thorn-CaveA Crown of Ice and SnowA Cradle SongDancing with SwordsA Sea of NettlesNo Honor, No Glory, Only Blisters in Unfortunate PlacesThe Hall of the SoothsayerBurrow Grubs

And so sad. I never realized how freaking sad it can be even if a) the evil was vanquished b) we get some nice chapters about what happens after. Cause they're sad!

Oh, look, Roran and Katrina has a baby! Now he's an uncle and he can watch his cousin and niece grow up and start aging and dies after what are a few years!

Look, Arya is (spoiler)! Well, let's freaking leave Arya so our lives seem like they're never going to cross again!

Wait, Eragon's famous now? He can do a lot of great stuff for the people? Let's leave the country! Kind of forever! Which is not a spoiler cause it was said right in the first book!

And now you have a family? From basically an orphan, you now have people who care about you and your life is now ready to be happy? Why, let's leave them all!

Really didn't expect to be thrown into a "life is death, everyone dies, wars will be again, but thay may actually be preferable cause without war, it's so boring around here!". Such a bad case of depression!

And I really don't appreciate this series going all YA on our asses. Like, seriously, what the hell?

It wasn't enough to kill of Varden leader and put in his is-she-even-legal daughter, no. It wasn't enough getting rid of the dwarf king and putting in someone who's practically a baby in dwarf terms. No, let's kill another monarch so we can replace them with another too-young-to-really-do-this person! How wonderful! Christopher Monarchkiller. Like Eragon! Who is, whoa, a 16 year old!

At least a certain red dragon and his rider got a HFN, which would be a hard limit.

I am even happy for the Queens Have to Be Tough and Make Touch Decisions Nasuada, even if she flogger Roran for which I am not sure I can forgive her. Yes, this world is harsh, the society is harsh, the laws are harsh but I kind of see it like Eragon entrusted Nasuada with one of the things he treasures the most - the life of Roran and what she does? Hm? WHAT she does?? I can understand using his briliance and courage. I can understand helping him achieve great things. But to basically punish him for saving lives and being genius? No, punishing him at all? 50 freaking lashes??? Nope, you're evil, you have no heart, I detest you, that's not queenly, not making the tough decisions, that's just not being able to defy people and being shackled by your own version of what you should be and do.

But hey, it's a great series, great memories... just not as 100% happy about stuff now.

Book 1 and 2 are amazing, it was obvious he was inspired by Lord of the Rings but most modern fantasy is and he wrote the first book as a kid. It's justifiable. In Book 3 we see he has grown as a writer but his overconfidence with this fact becomes his downfall. He overwrites, trying to show off his growth by bouncing between different perspectives despite it being unnecessary (and frankly many times unwanted). Still it was decent addition. Here in book 4 he went off the deep end and all the issues with book 3 become amplified.

Not only is it drastically overwritten like book 3, he leaves too many loose ends (which he claims was "on purpose") for a final book in a series. Apparently he is also claiming he will one day write a book 5 to tie up these loose ends but it will not be for a very long time. I do not believe "The Fork, the Witch, and the Worm" is meant to be this book 5. The climax involving the big bad felt rushed and more went on outside the scene than in it. Moving to the ending, it is probably the worst of any book or series I've ever read. Three of the most prominent characters go against the natures he has just spent the entire series setting up, and everything is left on a very sad forlorn note. While I will defend his inspiration from Lord of the Rings in his earlier works, what he did here is inexcusable. The end is almost a carbon copy of the ending to the Lord of the Rings series.

I genuinely feel like Paolini said "Screw it" toward the end and did a great disservice to fans. In my honest opinion, this was the worst book in the series and the ending is unjustifiable and frankly lazy. I will likely never buy any of his works going forward.

@gbshe
Reviewed: 2019-11-30
Alfred A. Knopf
@ginadavidson
Reviewed: 2018-07-18
A good ending to a great series, but I really, really wanted Eragon and Arya to end up together :/
@rebeccamahany
Reviewed: 2012-10-07
Despite being a huge fantasy fan, it took me a while to actually read the first three books of the Inheritance series--something I only did at the behest of a friend. That was three years ago or so, before this book came out. And though I wanted to read the fourth book then, time passed and I gradually lost interest.

Well, I finally picked up the series once again, and remembered exactly why I lost interest in the first place: within a page, I was snickering at Paolini's writing. Besides the pretentiousness, the main problem I have with Paolini's writing were the completely unrelated tangents that he kept throwing in there. I mean, guys, Eragon discovers that the world is round. It's not enough that he's a Rider with superhuman abilities who will in all likelihood defeat Galbatorix. Nope. He also has to figure out that the world is round. Is this information relevant to the plot? Not even remotely.

And this happens all the time. There's a couple pages where Eragon talks to Orik about this ball of mud that Orik's making. Yeah. Paolini felt it was necessary to detail how this ball would be completed, and what it would look like, and what the purpose was. Its purpose, not surprisingly, was completely irrelevant to the story, and the ball of mud isn't brought up again in the entire book.

The writing was also a bit affected, besides being too detailed and long-winded, but that I could deal with. And for the vast majority of Inheritance, I was completely and somewhat inexplicably enthralled. I absolutely loved the Murtagh/Nasuada storyline. I even liked reading the somewhat ridiculous battle scenes, which were basically overly detailed descriptions of how Roran or Eragon or Arya decimates every single enemy they encounter without any trouble.

That was, in fact, how I felt about the vast majority of the book: it was ridiculous, but it was entertaining. At one point, for example, we learn about an elf named Thuviel basically turned himself into a nuclear bomb, the fallout from which gave the inhabitants of Vroengard Island cancer (he doesn't name it as such, but that's basically what it is), contaminated the whole island with "an invisible poison", and prompted mutations. Ridiculous? Yes. Entertaining? Hell yes--enough so that I stayed up until 3:30 in the morning to finish Inheritance.

And then we get to the ending. The climax was rather predictable (it's pretty apparent from the very beginning of the series that Eragon will eventually defeat Galbatorix, although I had no idea it would happen in such a sappy way), as was much of the falling action. And then Paolini made me want to throw the book across the room, which I probably would have done if the book were actually mine. Here's the issue: Eragon and Arya don't end up together. Neither do Nasuada and Murtagh. Now, the first was much less irritating than the second; I mostly only ship Eragon and Arya because, for the majority of the series, they're both so insufferable that they're perfect for each other--I mean, having to marry Eragon or Arya is something I wouldn't wish on my worst enemy. But they don't even kiss. Dammit, Paolini, if you're going to drag out this romance for four ridiculously long books, they'd better at least kiss. Once. That's all I ask.

But it was the Nasuada/Murtagh part that really disappointed me, because I actually liked both of them, and I thought they had a really sweet relationship. And then she goes to become queen and Murtagh's all like, "Oh, I have to go be by myself in the wilderness, because of reasons." No.

I firmly believe that not--exactly-happy endings are perfectly acceptable. A lot of my favorite books--The Unbearable Lightness of Being, The Age of Innocence, The Remains of the Day--don't have happy endings. But the author has to earn the right to do that. And Paolini did not. Everything else turned out perfectly in the end of Inheritance for the main characters. Everything thus far had pointed to an Eragon/Arya romance and a Nasuada/Murtagh romance. There was nothing to suggest that, unlike all the other elements of the plot, the main characters' romantic lives wouldn't be tied up neatly. So when neither of those couples got together, it didn't quite work with the tone of the rest of the novel. It also left me very irritated.