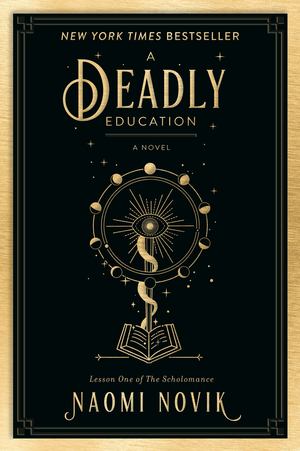 Naomi Novik
NEW YORK TIMES BESTSELLER * From the author of Uprooted and Spinning Silver comes the first book of the Scholomance trilogy, the story of an unwilling dark sorceress who is destined to rewrite the rules of magic. "The dark school of magic I've been waiting for." Katherine Arden, author of Winternight Trilogy I decided that Orion Lake needed to die after the second time he saved my life. Everyone loves Orion Lake. Everyone else, that is. Far as I'm concerned, he can keep his flashy combat magic to himself. I'm not joining his pack of adoring fans. I don't need help surviving the Scholomance, even if they do. Forget the hordes of monsters and cursed artifacts, I'm probably the most dangerous thing in the place. Just give me a chance and I'll level mountains and kill untold millions, make myself the dark queen of the world. At least, that's what the world expects. Most of the other students in here would be delighted if Orion killed me like one more evil thing that's crawled out of the drains. Sometimes I think they want me to turn into the evil witch they assume I am. The school certainly does. But the Scholomance isn't getting what it wants from me. And neither is Orion Lake. I may not be anyone's idea of the shining hero, but I'm going to make it out of this place alive, and I'm not going to slaughter thousands to do it, either. Although I'm giving serious consideration to just one. With flawless mastery, Naomi Novik creates a school bursting with magic like you've never seen before, and a heroine for the ages--a character so sharply realized and so richly nuanced that she will live on in hearts and minds for generations to come. Praise for Deadly Education "The can't-miss fantasy of fall 2020, a brutal coming-of-power story steeped in the aesthetics of dark academia. . . . A Deadly Education will cement Naomi Novik's place as one of the greatest and most versatile fantasy writers of our time."--BookPage (starred review) "A must-read . . . Novik puts a refreshingly dark, adult spin on the magical boarding school. . . . Readers will delight in the push-and-pull of El and Orion's relationship, the fantastically detailed world, the clever magic system, and the matter-of-fact diversity of the student body."--Publishers Weekly (starred review)

A Deadly Education is about El, an antisocial half-Indian, half-Welsh teen girl living in the magical boarding school, The Scholomance. There are no teachers and no holidays and monsters lurk around every corner, in every nook and cranny, trying to kill you. You either graduate your senior year or you die.

I decided that Orion needed to die after the second time he saved my life. I hadn't really cared much about him before then one way or another, but I had my limits.

You can't tell me you're not super intrigued by this book after those first two sentences! Those two grabbed my attention and they grabbed it hard.

This is the first book in The Scholomance series, and it starts at the end of El's junior year at Scholomance. There's a lot of information that El, in a stream of consciousness, went back to when things happened; ie: an info dump. Most of it set the scene for what was currently happening though. Naomi Novik created such an intricate and immense world that I wanted to find out more and more about. The different ways the teens would gather and store their mana (their magic) was interesting and unique.

It did take me a moment to get into this book too, but I really liked El and wanted to read her story. El isn't really meant to be liked, but she's full of snark and sass and is blunt and I couldn't help but to love her. She grew up away from other magic kids, in a commune, in a yurt!

The mals against the walls did start picking up their heads and peering at us, but since no one had ever been this stupid before, they couldn't immediately make sense of us.

Her social skills are pretty much nonexistent! But her journey in this book, and the connections she made with Aadhya and Liu and even Orion, made me so happy for her growth!

Speaking of Orion though... El and his relationship just made my day. Because neither one of them were ever treated normally by their peers, they just fit together wonderfully. El let Orion do his thing, but would still call him out for being reckless and would still try and help him when she could. As El put it, they came from opposite sides of treatment: Orion was the hero that everyone worshipped, and El was the one that everyone either ignored or avoided, but they both understood each other and didn't give the other any special treatment.

This book is fun, suspenseful, snarky, and entertaining. It very much starts off YA, but as El grows and softens her sharp edges a bit, the story moves into more of an adult voice and territory. It not only shines light on the setting and marvelous world building, but also on the classmates El becomes friends with. Classism and social privilege are a big part of this story as well and Novik addresses them in a way that is not preachy.

If you'd like a book with a different twist and meaning to magical boarding school, I would highly suggest picking this book up!

I love having existential crises at bedtime, it’s so restful.