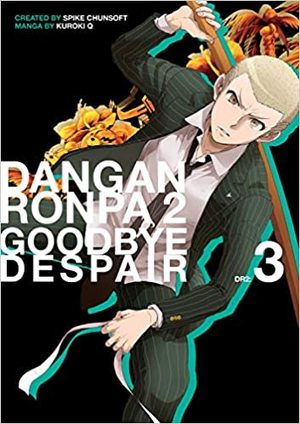 Spike Chunsoft, Kuroki Q
Despair is contagious...and so, it seems, is death! Fed up with the lack of bloodthirst from his captives, Monokuma has infected them with the Despair Disease, which manifests as cowardice in the mighty Owari...gullibility in the worldly Mioda...and dishonesty in the, er...in Komaeda. Afraid that they could commit murder while not in their right mind, the sick students are quarantined, keeping in touch with the "healthy" students by video monitor...only to find that despite all their precautions, the killing hasn't stopped! The conclusion of Danganronpa 2: Goodbye Despair...! Danganronpa 2: Goodbye Despair is an alternate version of the events told in the manga Danganronpa 2: Ultimate Luck and Hope and Despair. That series told the story through the eyes of "Ultimate Lucky Student" Nagito Komaeda; now Goodbye Despair gives you the perspective of his arch-rival in the desperate classroom murder game, Hajime Hinata!