Thing About Jellyfish, The 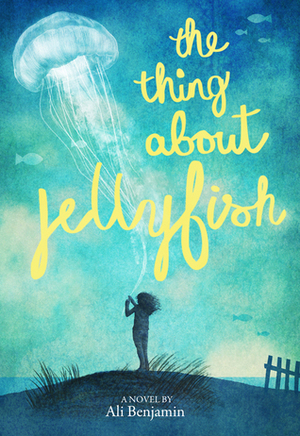 Ali Benjamin
A stunning debut about how grief can open the world in magical ways. After her best friend dies in a drowning accident, Suzy is convinced that the true cause of the tragedy was a rare jellyfish sting. Retreating into a silent world of imagination, she crafts a plan to prove her theory--even if it means traveling the globe, alone. Suzy's achingly heartfelt journey explores life, death, the astonishing wonder of the universe...and the potential for love and hope right next door.

@madhamster
Reviewed: 2021-06-09
Suzy is selectively mute after the death of Franny, who was her best friend.
Suzy doesn't fit in, in middle school, while Franny has begun to conform.
Trying to make sense of Franny's drowning, Suzy becomes convinced jellyfish as responsible, and begins researching them.
Suzy's grief is mixed with guilt, as she remembers the course of her and Franny's relationship. And, mitigated by her difficulty with understanding 'normal' relationships and emotions.
@orynsbelt
Reviewed: 2016-10-08
I can't remember when my mother told me how, as a child living in Cuba, she was stung by a jellyfish. I can't recall the details of the story; a story that I have not thought about until I read Jellyfish. Suzy, our twelve year old heroine, the summer entering seventh grade, was told that Franny, her estranged best friend, while vacationing with her family drowned. The first person narration chronicles mostly the internal thoughts of the devastating loss. To bring comfort and solace, her mom's four words/six syllabus phrase "sometimes things just happen" unsatisfactorily puts her scientific/logical personality at east. This puts Suzy in a determined tailspin to learn how Franny, a "great swimmer" drowned. Early in the school year, she attended a field trip to the local aquarium and passed the jellyfish exhibit and reads a caption that informs that the Irukandji jellyfish, measuring the length of human finger nail, possesses on the dangerous venom in the world. Merging this idea along and Franny's drowning, she concluded that this was the reason that causes her estranged friend's death. Determined to prove her theory as well as to come up with a topic for her assigned science project by Mrs. Turton, Suzy decides she will approach this situation by employing the scientific method. The novel is organized into six parts to mimic the scientific method. Suzy the burgeoning scientist chooses this route to deal with the loss of her friend. At the end, through intentional and intentional interactions: her unfulfilled trip to Australia, stealing money and a credit card from her parents, an unexpectedly and surprising starting a quasi-friendship with Malorey, her lab partner, she learns a morsel of wisdom of her mother's conclusion "sometimes things just happen." Jellyfish is ready made for a interdisciplinary unit between English Language Arts and Science especially for middle school. Scientific fiction genre fulfills the reading and science geek without imposition. The novel could assist the uncomfortable science project student get comfortable with the idea of discovery and experimentation all the while fulfilling the burgeoning bibliophile need to explore with Suzy how to deal with death at the tender age of twelve. Death of a friend is a situation a preteen shouldn't have to experience but as Jellyfish teaches "sometimes things just happen." and if we have access to support those tough, albeit unavoidable will "sting" less.
Item Posts
@orynsbelt5y 1mo
completed ... on 2016-10-08
© 2021 libib.com / All rights reserved