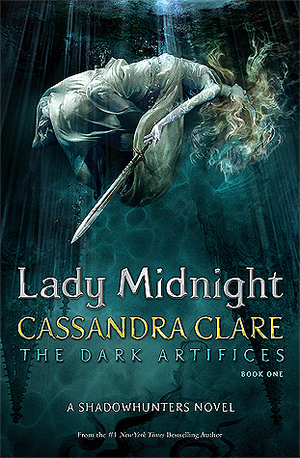 Cassandra Clare
The Shadowhunters have reached Los Angeles in the first novel in Cassandra Clare’s newest series, The Dark Artifices, a sequel to the internationally bestselling Mortal Instruments series. Lady Midnight is a Shadowhunters novel.It’s been five years since the events of City of Heavenly Fire that brought the Shadowhunters to the brink of oblivion. Emma Carstairs is no longer a child in mourning, but a young woman bent on discovering what killed her parents and avenging her losses. Together with her parabatai Julian Blackthorn, Emma must learn to trust her head and her heart as she investigates a demonic plot that stretches across Los Angeles, from the Sunset Strip to the enchanted sea that pounds the beaches of Santa Monica. If only her heart didn’t lead her in treacherous directions… Glitz, glamours, and Shadowhunters abound in this heartrending opening to Cassandra Clare’s Dark Artifices series.

LADY MIDNIGHT is the first book in a spinoff series of The Mortal Instruments by Cassandra Clare. Cassandra Clare has written the six-book series The Mortal Instruments, and the prequel trilogy, The Infernal Devices. She recently released The Iron Trial with Holly Black, which is the first book in a middle grade fantasy series.

The main characters, Emma and Julian of Lady Midnight were actually introduced in the final Mortal Instruments book, but they were twelve years old at the time. LADY MIDNIGHT builds on their story, and starts when they’re about seventeen. Because it builds off of the lore of the other books, there’s less explanation for the reader about the schematics of their world. I fully recommend reading Cassandra Clare’s other books before diving in to LADY MIDNIGHT, in part because the world will make a lot more sense.

LADY MIDNIGHT takes place in Los Angeles, a very different setting from Cassandra Clare’s other books. We get to see a lot of the Shadow World that we didn’t see in other books. The book actually starts out in what is called the Shadow Market, a place where people come to sell black market magical items. We also see the LA Institute

Emma is quite possibly one of my favorite heroins ever. Unlike in many fantasy novels, Emma isn’t new to the Shadow World. Like the rest of the characters, she’s lived in it her whole life. When she was twelve years old, her parents were murdered. That event has shaped how the rest of Emma’s life has developed. She is easily one of the best Shadowhunters around, and doesn’t hide away from her strengths. Emma takes kick-butt to a whole new level, and I loved seeing that right off the bat.

While Emma is a fighter, Julian is an artist. He can fight as well as the next person, but fighting isn’t where his heart is. Instead, Julian fights demons and other beings to protect his family. In fact, Julian has done a lot for his family. When Julian was twelve, he lost his parents as well. This is part of why Emma and Julian bonded so much. Julian also has four younger siblings. Due to extenuating circumstances, Julian has had to raise his siblings for five years. Let’s just say he’s good with kids. I really liked Julian as well. He was a nice balance for Emma, and was a rock that everyone could lean on. In some ways he seems naive, but when you get down to it, he’s seen just how horrible the world can be.

Every part of LADY MIDNIGHT was well done. I was rooting for Emma and Julian’s romance from page one, even though right off the bat, we know that it’s forbidden. I loved getting to meet Mark, Kieran, Ty, and Christina, along with the rest of the characters. I wasn’t expecting to love this book. I knew I was going to read it and like it, as I’ve liked everything else Clare’s written, but just how much I loved it blew me away.

Along with being a fantasy, a romance, and an adventure story, LADY MIDNIGHT is also a mystery. Mystery and fantasy don’t always mix well, but this one really did. Each character is important in solving a piece of the puzzle. There are so many twists and turns as the plot progresses. I honestly had no idea where the story was headed until it got there. LADY MIDNIGHT was a nice change of pace from the more predictable books I’ve read recently.

I would honestly recommend this book to everyone. It was an amazing read and even though I read it a month ago, I can’t stop thinking about it. It tore out my heart and shattered my soul in all the right ways. I cannot wait for Lord of Shadows, and will probably reread this a million times while I wait for it. If you haven’t read any of Cassandra Clare’s books, pick them up right now so that you can read LADY MIDNIGHT with the same amount of love that I did!