1491: New Revelations of the Americas Before Columbus 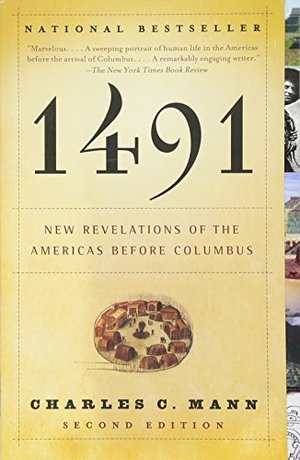 Charles C. Mann
In this groundbreaking work of science, history, and archaeology, Charles C. Mann radically alters our understanding of the Americas before the arrival of Columbus in 1492. Contrary to what so many Americans learn in school, the pre-Columbian Indians were not sparsely settled in a pristine wilderness; rather, there were huge numbers of Indians who actively molded and influenced the land around them. The astonishing Aztec capital of Tenochtitlan had running water and immaculately clean streets, and was larger than any contemporary European city. Mexican cultures created corn in a specialized breeding process that it has been called man’s first feat of genetic engineering. Indeed, Indians were not living lightly on the land but were landscaping and manipulating their world in ways that we are only now beginning to understand. Challenging and surprising, this a transformative new look at a rich and fascinating world we only thought we knew.

"When I went to high school, in the 1970s, I was taught that Indians came to the Americas across the Bering Strait about thirteen thousand years ago, that they lived for the most part in small, isolated groups, and that they had so little impact on their environment that even after millennia of habitation the continents remained mostly wilderness. Schools still impart the same ideas today...[But] this picture of Indian life [is] wrong in almost every aspect. Indians were here far longer than previously thought...and in much greater numbers. And they were so successful at imposing their will on the landscape that in 1492 Columbus set foot in a hemisphere thoroughly marked by humankind."

Charles Mann's 1491: New Revelations of the Americas Before Columbus is a great introduction to the current thinking about what this side of the planet was like before 1492. In particular, he presents how previous assumptions about the Americas are varieties of what Mann calls "Holmberg's mistake" (named after a certain scientist). The mistake is "the supposition that Native Americans lived in an eternal, unhistoried state." The three greatest mistakes about the 1491 Americas that he investigates are: the natives were few in number; the natives had not been here very long; and, the natives had little impact on their environment(s).

Part 1 actually spends a lot of time in the period just after Europeans appeared and demonstrates that the population of the Americas was larger than that of 15th c. Europe. The catastrophic demographic collapse (~96%) was mostly caused primarily by Old World diseases. But, because natives descended from a smaller ancestral population, their immune systems were more alike than different and lacked the genetic variation that allowed higher fractions of Old World peoples to survive when they first encountered the same diseases.

Part 2 investigates how long Native Americans have lived in the Americas, and the general consensus is 20,000-30,000 years, far earlier than once conceived. They also may have come in multiple waves. Part 3 takes an amazing look at the incredible impact Indians had on their environments, arguing that the Indians did not simply live in an Edenic state of humbly living off whatever they came across. In fact, the Americas that the Europeans settled in was in many places a "manufactured" landscape, having been not only cultivated but worked over by slash-and-burn on a massive scale. Even the Amazon shows that the very soil of large areas has evidence of human meddling to make it better for growing. Lastly, the explosion of species such as bison and passenger pigeons that early settlers encountered is a testament to how natives once kept those populations low before being felled by pestilence.

Since Mann is a journalist, this book is not so much a historical, anthropological, or archaeological work as it is a book about history, anthropology, and archaeology. It tells the stories of not only Native Americans but of the scientists who have been changing the ways we view them through new discoveries. 1491 is, thus, a readable and fascinating layman's overview of the pre-Columbian Americas and its peoples.

@fourfreedoms
Reviewed: 2019-05-17
I remember being blown away by this book but unfortunately my notes (what I can find of them) from that time only consist of the following:
p. 251 bison fire Ny-GA
p. 256 weed crops food: maygrass patties, steamed knowt-weed beans, little barley
p. 265 hickory nut milk -grind boil strain
p. 333 Iroquoian Great law of Peace
Read, Write, Dream, Teach !

Wow to the first civilization being in Peru rather than Asia, based on seafood rather than agriculture and knocking all the Eurocentric archeologists for a loop,

Super wow to the existence of a body of literature in Nahua from the Mexica/Aztec and meso-American civilizations that is larger than the Greeks, and not yet translated,

Yikes to the pigs actually carrying dozens of diseases that are transmissible between them and not only us, but several of our domesticated animals as well, making Europeans far far more microbe resistant than North/South Americans. and the 3/4 Siberian death rate made a 90% death rate absolutely plausible in the Western hemisphere: pigs :-(