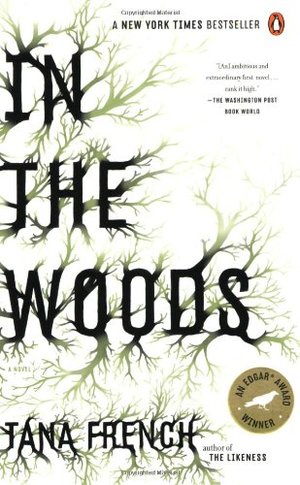 Tana French
As dusk approaches a small Dublin suburb in the summer of 1984, mothers begin to call their children home. But on this warm evening, three children do not return from the dark and silent woods. When the police arrive, they find only one of the children gripping a tree trunk in terror, wearing blood-filled sneakers, and unable to recall a single detail of the previous hours.Twenty years later, the found boy, Rob Ryan, is a detective on the Dublin Murder Squad and keeps his past a secret. But when a twelve-year-old girl is found murdered in the same woods, he and Detective Cassie Maddox—his partner and closest friend—find themselves investigating a case chillingly similar to the previous unsolved mystery. Now, with only snippets of long-buried memories to guide him, Ryan has the chance to uncover both the mystery of the case before him and that of his own shadowy past.Richly atmospheric, stunning in its complexity, and utterly convincing and surprising to the end, In the Woods is sure to enthrall fans of Mystic River and The Lovely Bones. And look for French's new mystery, Broken Harbor, for more of the Dublin Murder Squad.

@kayliejas
Reviewed: 2020-03-08
I read In the Woods, the first book from Tana French, after having first read her second book, The Likeness. I LOVED The Likeness. So maybe I was comparing this first book to that one. Reading the second book I also already knew that Cassie was going to sleep with her partner and completely ruin their friendship and working relationship. You would never know that ahead of time reading the first book first, so part of me kept waiting for the shoe to drop. I also disliked the narrator. Again, part of it was me coloring my opinion of him based on what he would eventually do, but even so I felt he was not a very developed character. We never really get to know him, he doesn’t say a whole lot, and he is completely shitty the way he sleeps with Cassie in a fit of depression and then completely blames her for it. And I can’t believe he could get away with hiding his identity for so long and being cop. That was a little hard for me to buy. The idea that this new case was potentially linked to his was very interesting and even though they ended up not being linked, I was okay with that, but I wish we would have learned more about his case. The author beats it to death, Ryan is going out in the woods trying to remember and on and on and in the end we never learn what happened. I just wish we could have learned something. They even go off on a tangent about a creature possibly in the woods - the beating of wings and smell of a zoo - but never explain that. But despite all that I liked the twist at the end (older sister did it) and really enjoy her writing. I definitely want to read more of her books.
Item Posts
@gmbs2y 9mo
completed ... on 2019-04-09
@gmbs2y 10mo
began ... on 2019-03-13
@chefmagnum3y 0mo
completed ... on 2019-01-22
@mkstew3y 4mo
completed ... on 2018-09-13
@gmbs3y 9mo
began ... on 2018-04-16
@500booksblog4y 1mo
completed ... on 2017-11-25
@500booksblog4y 1mo
began ... on 2017-11-21
@erindowd5y 0mo
completed ... on 2017-01-12
© 2022 libib.com / All rights reserved