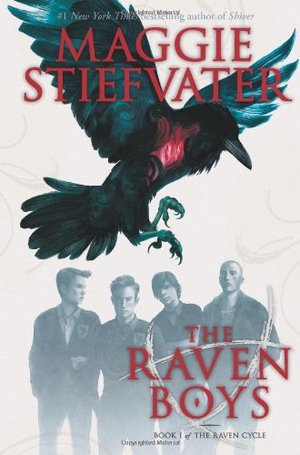 Maggie Stiefvater
An all-new series from the masterful, #1 New York Times bestselling author Maggie Stiefvater!"There are only two reasons a non-seer would see a spirit on St. Mark's Eve," Neeve said. "Either you're his true love . . . or you killed him." It is freezing in the churchyard, even before the dead arrive. Every year, Blue Sargent stands next to her clairvoyant mother as the soon-to-be dead walk past. Blue herself never sees them-not until this year, when a boy emerges from the dark and speaks directly to her. His name is Gansey, and Blue soon discovers that he is a rich student at Aglionby, the local private school. Blue has a policy of staying away from Aglionby boys. Known as Raven Boys, they can only mean trouble. But Blue is drawn to Gansey, in a way she can't entirely explain. He has it all-family money, good looks, devoted friends-but he's looking for much more than that. He is on a quest that has encompassed three other Raven Boys:

@aeshley13
Reviewed: 2019-12-03
I LOVED this book. So different to what I thought it was going to be about. A perfect blend of psychics, murder, history, myths, ravens, and lovable boys. Can not wait to see where this story goes! I love each of these boys in a special way except now Adam who will hopefully redeem himself. Go B + G! Those glasses though. Also I really enjoys Blues family.
@scaredofspiders
Reviewed: 2018-12-26
I had a hard time with the boys characterization.
1) Some effort was made early on to tell how reckless and wild they were but none of it jived with the actions you are shown while reading.
2) It was impossible for me to reconcile Gansey's age with his apparent worldliness and YEARS of extensive research.
3) No one would let these kids live with literally no adult supervision.
Granted, I don't know a lot of scions to zillionaire families but I just couldn't get behind all of this at all. It all kept pulling me out of the story with thoughts like "bullshit," "no gd way," " are you effin kidding me?!" and etc.

I maybe don't care at all about the plot or about any of the characters except Blue. If I read any of the rest of the books they will be for her. If she can stop being written deliberately into a weird outcast. Seriously, I think of her as a relatively normal, average, introverted teen until the author makes sure to mention she made her shirt out of rubber bands or somethings so you know she's "totally out there." Such obvious manifestations of awkwardness in creativity aren't necessary and are kind of theatrical--like 80s movie theatrical. Like Molly Ringwold in Pretty In Pink theatrical. Actually, Blue may be Andie.

You know what? Nevermind. Scrap reading this book. Just watch Pretty In Pink. It will take less time and you will be watching the original that made the cliché that Steifvater is modifying. Then read a book about an adult having a lifetime of research and finally having a breakthrough into something fantastic. I guess The Davinci Code would work but I haven't read (nor watched) it so I'm not 100% on that one. Maybe pick Outlander if you aren't worried about the character's research as much as the author's!!
Seriously, if you're a diehard fan of the Steifvater, the writing is compelling enough. However, if you require any kind of believability from your characters, do yourself a favor and forget about this one.
@bookaddictguide
Reviewed: 2017-12-07
4.5 stars
Initial Impressions: VERY interesting book. Wasn't quite wowed as much as I had hoped but absolutely was shocked by some really clever twists. A very different feel than The Scorpio Races (apparently I was expecting something similar) but in a way that makes both books special in their own way.

Review originally posted on The Book Addict's Guide: THE RAVEN BOYS was totally different than I expected, but in a good way. I read SHIVER from Maggie Steifvater about a year ago and wasn’t crazy about it at all and then got the audio of THE SCORPIO RACES and began to feel a lot better about how I would be able to dive into THE RAVEN BOYS. For some reason I was expecting that same “older” feel that THE SCORPIO RACES had, but really THE RAVEN BOYS is a modern-day story, although it has many ties to the characters’ past as well as historical legends and paranormal practices. For some reason, I kept getting the feel of the movie The Skulls. (Even though the plots really aren’t similar. Maybe it was just the boys at a private school. How easily I am reminded of things!)

I think I went into THE RAVEN BOYS thinking it was going to be more of a contemporary feel with a hint of paranormal, but really the paranormal is a key player in the book. Blue, our main female character, lives in a house with her mother as well as other relatives/women, all of which possess psychic abilities. Except for Blue, that is. Blue is merely an amplifier of psychic energy for others but doesn’t possess abilities of her own. Without rehashing the plot (see Goodreads summary above), Blue’s life starts to get complicated once she starts to tangle with “the raven boys” – The boys who attend Aglionby in their raven embroidered shirts.

At first I was terribly interested yet slightly confused about what was going on in this book. It was clearly very deliberately written, all of the intersecting moments between Blue’s story line and Gansey/Adam’s story carefully and I must say very creatively chosen. It wasn’t until Blue started to get to know the Aglionby boys that I finally got a solid feeling for all of them because up until then, we get alternating chapters from different characters and they’re each describing each other with unfamiliarity. It caused a bit of confusion on my part, but rest assured it did come together and I actually did kind of like the POV weaving in and out and seeing different vantage points. It almost felt like a movie the way it jumped from character to character. We still see Gansey & Adam when it’s Blue’s POV, but in an incredibly different way than Blue sees her own life, etc etc.

The whole plot of the ley lines was interesting but the connection to Glendower and Gansey’s obsession with finding him was kind of fuzzy to me. I felt like I half understood his obsession and the other half was confused on why it really mattered so much. I didn’t get the answer to the obsession until later in the book — which does play out well with several plot twists and SUPER interesting reveals — but keeping that secret until the end of the book made me feel like I didn’t really grasp that story or obsession.

Maggie Steifvater has some amazing plot twists, one of which I kind of saw coming but was even deeper than my original guess so that made it even more awesome! The paranormal aspects and involvement with spirits is not meant to be creepy, so that really made me happy since I don’t do well with “scary” ghost stories. On the contrary, it was a very good interaction with the spirit world as well as some really cool elements of an entirely different kind of paranormal that the plot dips into with the ley lines. Very, very cool stuff. It definitely gave me the shivers and kind of made me wish I could have experienced that too! I don’t want to go into details because it’s really best just to read it yourself, but VERY cool ideas from Steifvater.
I also really liked how we’re given a few specific clues and “prophesies” so to speak and not all of them are answered in book one. I think that also brought a draw to see how this turns out in the second or third or whatever book of this series. It makes me feel like the series has a “bigger picture” to it and I like that not everything was neatly wrapped up in the first book. I think it’ll give a great tie between books in the series which happens to be something I struggle with from time-to-time.