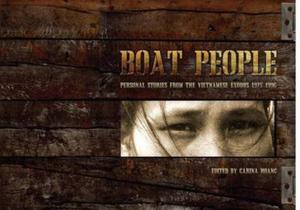 The years 1975 to 1996 were witness to the largest mass migration in modern history, when more than a million people left war-torn Vietnam by boat in search of safety. Nicknamed “Boat People,” the desperate families often did not survive the journey. Thousands perished when their boats fell apart en route, while others succumbed to starvation, dehydration, and cold-blooded attacks by Thai pirates. Editor Carina Hoang—a survivor of the Exodus and a Special Representative for Australia for the UN Refugee Agency (UNHCR)—has compiled a book of rich personal stories, of the perilous sea journey, the time spent in refugee camps, and the final journey to new adopted homelands. Boat People: Personal Stories from the Vietnamese Exodus 1975–1996is Hoang's moving account of the Vietnamese refugees that combines autobiographical accounts from survivors with evocative images from the time. After fleeing Vietnam with her family at the age of 16 in a wooden boat full of 373 refugees, Carina Hoang stayed in a UN refugee camp in Indonesia. When she received amnesty from the United States, she earned a B.S. in Chemistry at Rosemont College in Pennsylvania. Though many of her relatives now live in the U.S., Carina eventually settled in Australia with her husband and daughter. In recent years, Carina has taken groups of former “boat people” back to the camps in Indonesia where they escaped to from Vietnam, searching for the graves of those who did not survive. After taking her first trip back to Indonesia and posting some photos of gravesites online, other refugee families had contacted her. They had recognized their relatives' names on the graves in the photos, and asked to accompany her on future trips. Her book is filled with the first-hand accounts of these Vietnamese "boat people" and their families (including her own).