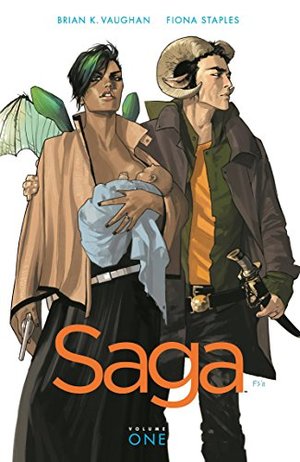 Brian K Vaughan, Fiona Staples
When two soldiers from opposite sides of a never-ending galactic war fall in love, they risk everything to bring a fragile new life into a dangerous old universe. From New York Times bestselling writer Brian K. Vaughan (Y: The Last Man, Ex Machina) and critically acclaimed artist Fiona Staples (Mystery Society, North 40), Saga is the sweeping tale of one young family fighting to find their place in the worlds. Fantasy and science fiction are wed like never before in this sexy, subversive drama for adults. This specially priced volume collects the first six issues of the smash-hit series The Onion A.V. Club calls "the emotional epic Hollywood wishes it could make." Voted one of the top graphic novels of the year by the NYT, IGN, the Examiner, and SF Weekly. Voted Best Comic of the year by MTV Geek and Best New Series by Paradox Comics. Voted a finalist in the GoodReads Best GN of 2012 contest. Voted #2 Graphic Novel of 2012 by Amazon editors.

@sphuggins
Reviewed: 2021-01-21
Ugh. So. Good.
@lejlab
Reviewed: 2020-08-28
This book is really good. The writing mixed with the beautiful pictures is the perfect combination. Also the story line is super interesting. I read it in less than an hour. Definitely do recommend.
@yupa
Reviewed: 2020-05-28
This series has a seemingly banal story archetype, Romeo & Juliet in space, but it quickly proves itself to be far more interesting. Every few pages introduces fresh sci-fi and fantasy concepts, while the characters are all fully fleshed out if nothing else. I was actively engaged for the entire book, which is rare for me with action-esque comics.

I haven't read the next books in the series as of this review, but I hope Vaughan is able to maintain an interesting ongoing drama. Plenty of writers can think of neat ideas, whether or not they can tell equally fascinating stories is another question.
@virago
Reviewed: 2019-06-08
I've been hearing about how good Saga is for a while, so when I was searching through box upon box of comics at Comic Con this year, I came across Volume 1. It was half off, so I figured it couldn't hurt to get just one....

I'm hooked. This story is great and the art is beautiful. I never did find Volume 2, but I'm kicking myself for not grabbing the other Volumes I found because the price was right!!

I don't even know how to review this, other than to say that the story keeps you hungry for more. I want to know more about this war. How and why did it start? Does anyone even know what they're fighting for anymore? Has anyone even considered peace? How did Marko and Alana fall in love? How did they escape? How will they stay safe? So many questions; it's like watching an episode of Lost! I cannot wait to get a hold of Volume 2.
@untravel
Reviewed: 2018-11-10
Weirdly good. Difficult to recomend. The story is filled with oddly out of place 'contemporary' references and expressions, which at the same time take place in a slapdash sf/fantasy world. For example, there is a great war between a planet and a moon, which at the same time spans the galaxy. Everyone, regardless of horns or wings, speaks like they're from Ohio. There is character called 'Baron Robot IV' with a television for a head but a human body, wearing a 19th century aristocrats military uniform. And so on. If a kid handed you this to read, you would chuckle (with either pity or condescension) and not give it a second thought.

But instead of 'some kid', it's Brian K. Vaughan, i.e. clearly someone that knows how to write. This bare fact and other more subtle clues (e.g. the expert pacing) suggest that the amateurishness of the setting is not an accident but a deliberate choice. What looks like crap is in reality an Ode to Crap, a riff on the storytelling of childhood, an old song in your head from way back, played back as an adult, looking back.

There's a lot going on structurally that I really like. Like a child's story, the narrator is a child. But instead of an orphan with a 'special destiny' etc., the story is the story of her parents. The character and motives that drive the plot are those of a parent, not a child. It's a story about parenthood, not childhood. The narrator is talking about her past, about events that occured when she was a baby. So while she is telling the story, at the same time this is a story that must have been told TO her. Basically, the story, this Saga, is simultaneously a story told as if by a child and as if by a parent for a child. I might have a think about this and blather in more detail later.

Lastly, the art by Fiona Staples is top notch. Vaughan claims that she told him a joke about herself as a comic book artist: "You can't make a comic book without staples!" This is the sort of anecdote that is so good that it doesn't even matter if it's true. If you get it, just go with it, and enjoy the ride.
@tmilano
Reviewed: 2018-10-08

An epic series I just now discovered. I read the first volume and was hooked. I like the blend of sci-fi and fantasy with both space and magic rolled into one series. Also great to see a story about an interracial family! I'm sure I'll read all of these.