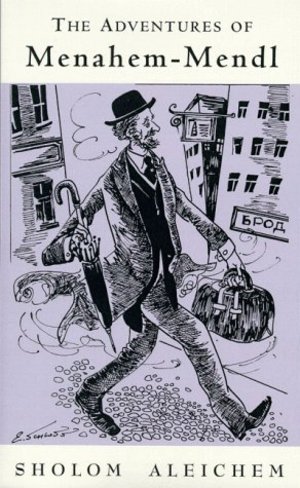 Sholem Aleichem
Menahem-Mendl is one of Sholom Aleichem's richest characterizations. An incurable optimist, whose every venture ends in disaster, he is the perennial Luftmensch who never ceases to build castles in the air.The exchange of letters between Menahem-Mendl, trying his luck in the bigger cities of Czarist Russia, and his wife, who remains behind in a small town in the hinterlands, relates his hilarious, but frustrating, experiences as he seeks his fortune-first as a currency and stock speculator (who cannot speculate), as a matchmaker (who cannot arrange marriages), as an author (who cannot write), and as an agent (who buys what he cannot sell).As his hopes repeatedly rise only to vanish in smoke, as he becomes involved with rascals and rogues, rich men and poor, the reader is at once amused and astounded by the predicaments in which he becomes entangled. But no more so than his long-suffering, ever-faithful wife, Sheineh-Sheindl -- scolding and querulous, but ever ready to succor him in his most desperate moments.In re-creating a vanished way of life with warmth and considerable verve, the book reflects the eternal human condition, equally true and meaningful today. "The adventures of Menahem-Mendl" is a memorable achievement-a masterwork by an eminent figure of world literature.